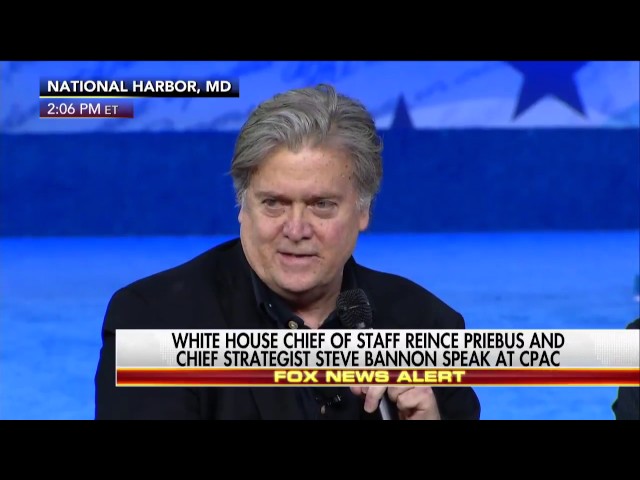 During a question and answer session at CPAC, White House Chief of Staff Reince Priebus and Chief Strategist Steve Bannon spoke about President Donald Trump‘s commitments he made during the campaign and that he is determined to fulfill them despite what the globalists and fake news media do or say about him.

He warned that things will not get better at first. Rather, he said they would “get worse every day in the media.”

“The corporatist, globalist media that are adamantly opposed to an economic nationalist agenda like Donald Trump has,” Bannon said. “President Trump has really laid this out, as Reince said, many years at CPAC. It’s really CPAC that originally gave him the springboard. It’s the first time at Breitbart we started seeing him and saw how his speeches resonated with people, and then he would go out to these smaller town halls later and he got traction with the same message he’s bringing today.”

Brannon then warned the audience at CPAC what was about the get worse.

“If you think they’re going to give you your country back without a fight, you are sadly mistaken,” Brannon added. “Every day it is going to be a fight, and that is what I’m proudest about Donald Trump. All the opportunities he had to waiver off this, all the people who have come to him and said, ‘Oh, you’ve got to moderate,” every day in the Oval Office, he tells Reince and I, ‘I committed this to the American people, I promised this when I ran, and I’m going to deliver on this.'”

Well, so far, we have seen a lot of what Trump promised for his first 100 days in office. He’s just completed his first month and already the Democrats are losing their minds, calling for his impeachment for anything, including things that never occurred, and questioning his sanity under the 25th Amendment.

As I mentioned in the list of things he promised to the American people, some of the things are unconstitutional, and he is continuing to show support for those things. However, one of the most pressing things that we have not seen as of yet is the promise to tell his Attorney General, Jeff Sessions, to appoint an investigation into Hillary Clinton in order to prosecute her. You may think this is no big deal now because she is “out of power,” but understand the Clintons are still very powerful despite being out of office. They wield a tremendous amount of influence and cash

. Justice needs to be brought in the matter. We’ll see if that materializes in the Trump administration.

Additionally, the Obama executive order regarding LGBT “special rights” will not be rescinded, which is a campaign promise he made. Mr. Bannon, I call on you to remind President Trump of that promise, as well, even though he walked that back after the election, just like he and others appeared to do regarding the Hillary Clinton investigation.

Otherwise, I fully agree that the mainstream media has been covering so much for the socialists, Communists and Marxists in the central government and state governments for so long, they are not going to yield their power without a fight. However, so are their accomplices on the internet. Companies like Facebook, Twitter, and Google are purposely targeting conservative and constitutional sites and cracking down on them in search engines, algorithms and advertising.

This leaves wide open conservatives, Christians and constitutionalists the opportunity to build something in line with those platforms to compete. We often talk about capitalism. Well, let’s come up with a better solution than what they provide. Let’s come up with platforms on social media and internet search engines that allow the user alone to censor what they don’t want to see instead of looking for a central entity to do it for them. Then, if someone engages in libel, let the offended party sue them instead of censoring people. If the person is targeted and harassed, let the person bring the law to bear on those who are pursuing them.

We need to provide solutions to these problems that we have not given government the authority to deal with, and we better start doing it now. The bell of Round 15 has just rang.