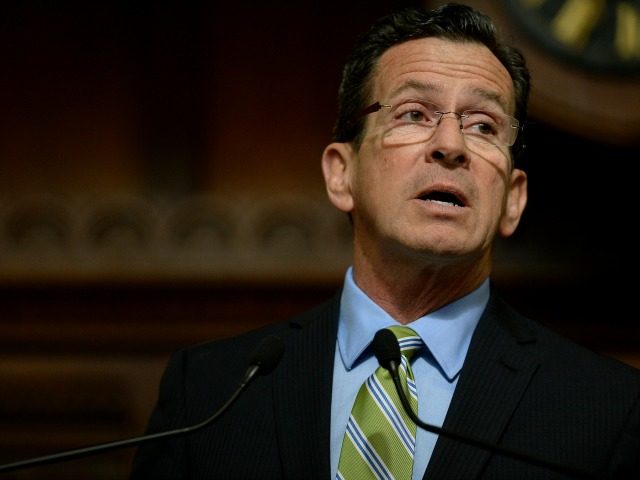 Well, Connecticut Governor Dannel Malloy is back at the center of attention as he instructed Connecticut police officers on how to refuse to comply with the united States’ immigration laws and the orders given by President Donald Trump regarding enforcement of those laws by Immigration and Customs Enforcement (ICE) agents.

According to a memo sent by Governor Malloy sent to state police and school district representatives, he said that there should be no attempt to detain anyone solely on the basis of their immigration status. Additionally, he advised them to not give ICE officers access to individuals in state or local jails.

“Law enforcement should not take action that is solely to enforce federal immigration law,” Malloy and two of his commissioners wrote. “The federal government cannot mandate states to investigate and enforce actions that have no nexus to the enforcement of Connecticut law or local ordinances.”

“Putting all opinions about this presidential executive order aside, its enforcement is going to have a local impact, especially given the constrained resources and financial impacts this will have on state and municipal budgets, which we already know are stretched to their limits, in addition to giving rise to serious concerns in affected communities,” Malloy said in a statement. “Above all, we are obligated to protect the rights afforded to all our residents and ensure that students attend safe, welcoming schools. The best approach for local communities is to have a plan in place so that everyone in our state, including young students, are supported respectfully and fairly under the laws of our state and our nation.”

Connecticut is one of a handful of states that call themselves sanctuaries for undocumented immigrants. A state law passed in 2013 requires law enforcement agencies to detain an individual for breaking immigration laws if they have been convicted of a felony, are a known gang member, are on a federal terrorism watch list or face criminal charges and have not posted bond.

In a memo to state school districts, Malloy’s office urged education officials to develop a plan in the event that immigration agents show up at schools. Malloy said he expected the Trump administration to adhere to the same guidelines as the Obama administration, which put schools, courthouses and other “sensitive locations” off limits to immigration enforcement actions.

“The message is loud and clear, the state of Connecticut will not allow the Trump administration’s racist and xenophobic actions to destroy our community,” Ana Maria Rivera-Forastieri, director of advocacy at Junta for Progressive Action, said in a written statement.

Of course, this has nothing to do with racism or xenophobia. It has to do with the law, period.

“Regardless of whether your family settled in Connecticut 300 years ago or three days ago, you are welcome here,” Malloy said in his State of the State address in January.

Again, settling in the state is not the issue. Settling illegally is the issue.

Leslie Torres-Rodriguez, Hartford’s acting superintendent of schools, issued support for children who are in the state illegally.

“Hartford’s legal and moral obligation to educate all children will not be derailed by any of the language in recent presidential executive orders,” she said. “We want each and every student to be in school and ready to learn in safe environment.”

While I realize the issue of children being brought in illegally by illegal parents is a delicate issue, the fact of the matter is that these people want to talk about “legal and moral obligations,” but don’t want to follow the law.

CTPost reported on a mayor and a police chief’s criticism of Malloy’s memo:

For now, Boughton said nothing has changed in Danbury regardless of what federal or state officials have issued this week in memos and news releases. But that could change if formal action is taken by the feds.

“If any federal agency, including ICE, asks for our assistance, we’re going to provide it as we always have done,” he said. “We’ll work as a force multiplier.”

“The governor just wants to score political points by saying ‘we’re going to stand against the president,’” Boughton said.

“Right now we have the TRUST act,” Danbury Police Chief Patrick Ridenhour said. “If someone’s arrested on minor offenses, with no record, no detainers or warrants from ICE, we’re not calling them. The bulk of our work is enforcing local ordinances and state laws. We don’t make the first call to ICE, we don’t start something.”

Ridenhour said that circumstances could change with further guidance from the federal government.

“Until we get more clarification, we’re going to handle this the way we have,” he said. “Right now, we have the TRUST act, I’ve already reminded my staff of the TRUST act.”

Mayor Boughton also said, “ICE doesn’t do random stops. When they call, they’re looking for somebody.”

Random stops would be a clear violation of the 4th Amendment, much like the TSA engages in each and every time it detains, searches or seizes anything from an American citizen at the airport.

“If you’re in the country and your undocumented, it’s a problem,” Boughton said. “You can’t say it’s not a problem.”

Thank you Mayor Boughton. That is exactly the issue here! Connecticut, you should have elected Joe Visconti!