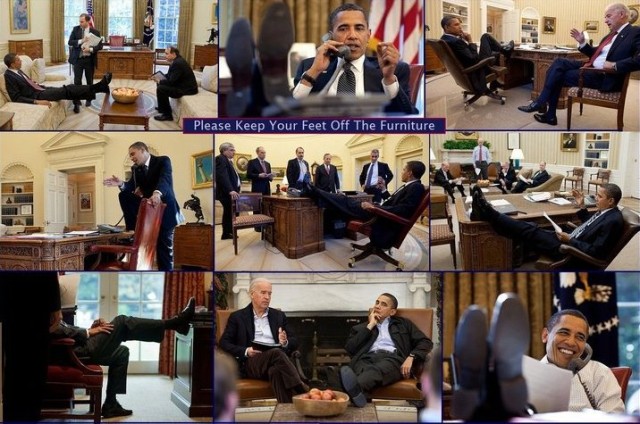 Fresh off their collective hissy fit over Donald Trump putting ketchup on his steak, anti-Trump leftists have now been triggered by pictures that show Kellyanne Conway putting her feet on a couch in the Oval Office.

The photos caused a liberal freak out across the board, with Keith Olbermann leading the charge, tweeting, “Get your fucking feet off the furniture, @KellyannePolls. This isn’t your home.”

Get your fucking feet off the furniture, @KellyannePolls. This isn't your home. https://t.co/12DpukKDkS

Chicago Tribune columnist Rex Huppke demanded answers, tweeting, “I have so many questions about this photo, but chief among them is why nobody is telling Kellyanne Conway to get her damn feet off the couch.”

I have so many questions about this photo, but chief among them is why nobody is telling Kellyanne Conway to get her damn feet off the couch pic.twitter.com/tU0CBS36Fe

NeverTrumper Louise Mensch even insinuated the behavior was racist.

No class @KellyannePolls – mutton dressed as lamb, feet on the couch, don't look at African-American leaders, your momma must be ashamed https://t.co/iOPjJSf4Nl

“Trying to imagine the reaction if any Obama admin. official sat on a couch in the Oval like that,” wondered MSNBC producer Kyle Griffin.

Trying to imagine the reaction if any Obama admin. official sat on a couch in the Oval like that.

Barack Obama himself was pictured literally hundreds if not thousands of times putting his feet up on furniture in the Oval Office, but intellectual consistency isn’t a characteristic of liberals.

Journalists chose to make the entire story about where Conway put her feet rather than talk about Trump’s meeting with leaders of black universities and colleges.

This is yet another example of Trump derangement syndrome, where every single tiny behavior or action by Trump or any of his administration gets inflated into a giant talking point.

The outrage over Conway’s couch faux pas follows a collective leftist hissy fit over Donald Trump’s hate crime of ordering his steak well done and putting ketchup on it.

Jezebel summed up the response, sniping that Trump had behaved “like a damn child” by asking for the tomato-based condiment with his meat. OK, calm down triggly puff, it’s not the end of the world.

This so enraged many that when I made a joke about anyone ordering their steak less than medium rare being a hipster, hundreds of mainstream hacks took it seriously and bombarded me with snarky messages on Twitter. Yes, really.

Jack Posobiec summed up the contrived outrage perfectly, tweeting, “The media is more upset about Trump putting ketchup on steak than Hillary putting missiles in the hands of ISIS.”