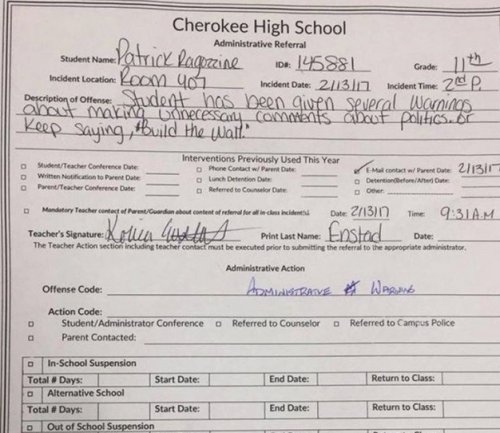 Paul Joseph Watson reports for InfoWars, Feb. 28, 2017, that Patrick Ragozzine, a student at Cherokee High School in Canton, Georgia (about 45 minutes from Atlanta), received an ISS (in school suspension) for supporting President Trump against students who called Trump a racist.

Ragozzine writes: “I overheard some students bashing Donald Trump, making false claims that he’s a racist, sexist, xenophobic person. The teacher defended the other students and began lecturing me on Trump’s ‘hateful’ rhetoric and how the other students have the right to hold those feelings.”

School officials summoned Ragozzine to a meeting and told him he couldn’t discuss politics in the classroom, and that “it’s wrong to be discussing a wall” in Canton, an area with a large Latino population.

Ragozzine’s punishment was changed to an “administrative referral” or warning after he posted about his in school suspension on Snapchat, and after his parents and friends complained to the school. But Ragozzine points out that the administrative referral “still goes on my permanent record (which colleges will see when I try applying) and they had to call my parents about it.”

The “administrative referral” form states, under “description of offense,” that “Student has been given several warnings about making unnecessary comments about politics or keep saying ‘build the wall’”.

What happened to Patrick Ragozzine isn’t the only Trump Derangement incident in U.S. public schools.

An elementary school teacher in Naples, Florida, was reassigned to administrative duties after praising Trump’s executive order on immigration. Earlier this month, a teacher in Tennessee was fired after posting on his Facebook page: “The only good Trump supporter is a dead Trump supporter.”