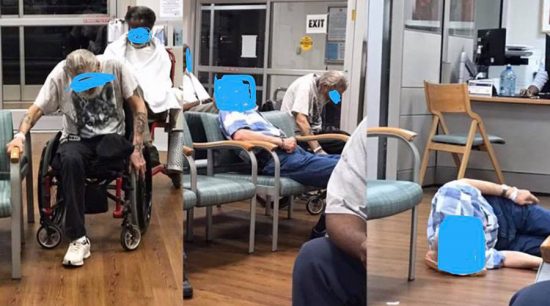 Photos of elderly veterans in extreme pain waiting for treatment at a VA hospital in Durham, North Carolina, have gone viral and are causing outrage directed at the Department of Veterans Affairs.

Retired Marine Stephen McMenamin and his wife, Hanna, were waiting at the Durham VA Medical Center when they noticed two veterans who were struggling in the waiting room. They documented what they witnessed on their February 24 visit on Facebook.

Mr. McMenamin told WSB-TV that his wife found “My wife found it upsetting, so she took a couple pictures.”

The man in the wheelchair on the left, were waiting in that waiting room at least 3 hours. The man bent over grabbing the chair, was yelling in pain and was borderline convulsing and almost falling out of his chair he was in so much pain. No one paid him any attention until I approached a nurse to please check on him. This gentleman sat in the waiting room in extreme pain for hours upon hours with very little attention paid to him.

The gentlemen seen in the two photos on the right, came in extremely sick. He could barely walk, sit up, or breathe. My husband had been directed to a chair just off the waiting area because it reclined (my husband was being seen for extreme lower back pain). Upon this man walking in and telling the nurse he needed to lay down, and her telling him to have a seat (with very little regard for his well being), my husband got up and offered this man the reclining chair. This man sat in the chair for probably about 15 minutes before he was told he had to get up immediately. Upon being approached by the nurse (who was extremely rude to him), he told her he could not sit up and he needed to lay down. She completely disregarded him and demanded he go sit in the waiting room area, leaving the recliner completely empty.

The McMenamins said both of the men were ignored for hours despite complaining of severe pain. They said one practically fell out of his wheelchair, and the other finally lay down on the floor after being denied a place to rest.

He said the veteran on the ground used his bag of medication for a pillow after being denied the available reclining chair.

“The nurse started yelling at him, telling him he can’t do that. He’s like, ‘I can’t get up and I won’t get up. I will be here until you can see me. Can I please have a blanket?’” McMenamin said.

Jesse Lee, a Vietnam veteran, was the man in the wheelchair. He told WRAL he went to the VA for severe phantom pains after a leg amputation. HE said he was in pain for several hours before he was finally seen.

“Somebody in real bad pain should be seen. It felt like a railroad spike was going through my foot. It’s like one of the worst pains you’ve ever felt in your life.”

The Director of the Durham VA Medical Center said in a statement to WRAL:

“Our mission is to provide the highest level of health care to veterans, so upon learning of the incident, I took swift action. The employee was immediately removed from patient care pending the results of an internal review.”

The McMenamins said the VA has contacted them and said they are conducting interviews to get to the bottom of what happened.