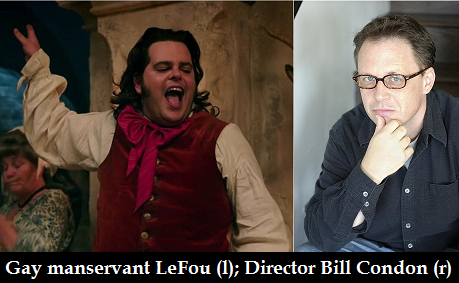 Disney has gone the route of full-blown propaganda in service of the Left’s cultural agenda.

Not only does the studio’s new live-action Beauty and the Beast movie portray the Beast as Baphomet, it also invented an entirely new character — LeFou, the homosexual man-servant of Gaston, the handsome but vain suitor of Beauty.

As Alisha Rouse reports for the Daily Mail, Feb. 28, 2017, that “in a change of convention, one character in the new Beauty and the Beast film is set to have the studio’s first ‘exclusively gay scene’ . . . manservant LeFou will explore his sexuality after developing feelings for macho leading man Gaston.

In an interview with the British “gay” magazine, Attitude, the movie’s director Bill Condon, who is openly homosexual, said the LeFou character is a “watershed moment” for Disney:

“LeFou is somebody who on one day wants to be Gaston and on another day wants to kiss Gaston. He’s confused about what he wants. It’s somebody who’s just realizing that he has these feelings. It is a nice, exclusively gay moment in a Disney movie. The studio is sending out a message that this is normal and natural – and this is a message that will be heard in every country of the world, even countries where it’s still socially unacceptable or even illegal to be gay.”