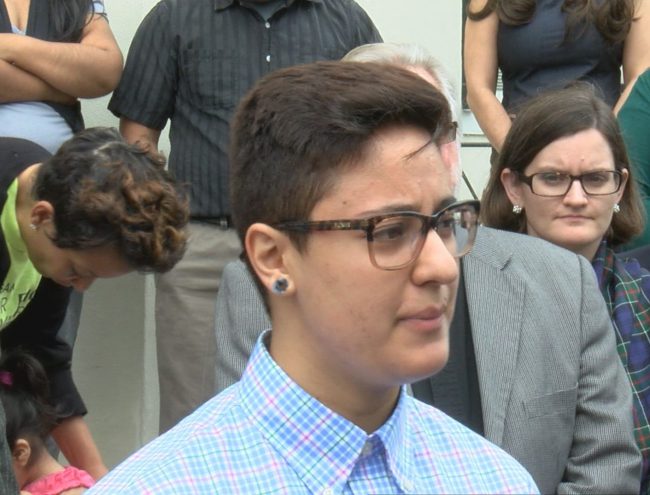 A 22-year-old illegal alien was detained Wednesday after holding a press conference to demand 11 million illegals be given citizenship.

For decades now, patriots have had to watch as illegal aliens boldly flaunt their illegal status with zero repercussions and dream about a day where they’d actually be detained and deported.

For these true “dreamers,” their dream may soon become a reality.

Federal agents arrested an illegal alien who was in former President Barack Obama’s 2012 “Dreamer” amnesty shortly after she left a Wednesday protest against the enforcement of immigration law.

Daniela Vargas, a 22-year-old Argentinian whose family brought her to the U.S. when she was seven, was arrested after talking to the media about the deportation of her illegal alien family members, she told the Huffington Post. She had failed to renew her amnesty “Deferred Action for Childhood Arrivals” status, so ICE classified her as a visa overstay.

According to the Clarion-Ledger newspaper, agents from U.S. Immigration and Customs Enforcement told Vargas that “You know who we are, you know what we’re here for,” when they detained as she drove away from her press conference. She is being held without bond.

Her Argentinian father and brother were detained on February 15, after living in the United States for at least 15 years, according to the Huffington Post. She was not detained on that day after she claimed that she was protected by Obama’s DACA amnesty.

The roughly  1.4 million illegal aliens who rushed to claim Obama’s partial amnesty and work permits made themselves prime targets for repatriation by providing the federal government with their identities, addresses, and their admission that they are in the country illegally, often with forged or expired documents.

“Four years ago I pointed out the fundamental problem with the Deferred Action for Childhood Arrivals (DACA) program,” writes John Miano at the non-partisan Center for Immigration Studies (CIS). “Anyone who signed up for DACA would be adding their names to a list of self-identified illegal aliens. Should a future administration decide that it would start enforcing the law, the DACA program would provide a list of prime candidates for deportation,” he wrote.

Unvision released partial video of Vargas at her press conference where she demanded citizenship for 11 million illegals:

According to CNN, Vargas said: “The path to citizenship is necessary for DACA recipients but also for the other 11 million undocumented people with dreams. Today, my father and brother await deportation while I continue to fight this battle as a Dreamer to help contribute to this country, which I feel that is very much my country.”

I guess she’s as confused about what is “her country” as she is what is her gender. Your country is Argentina. You left when you were 7, which is pretty old, certainly old enough to have plenty of memories and an understanding of your home country.

If you want to contribute to America, return to Argentina and pay back the $200,000 plus you received in welfare to go to school on taxpayers’ dime so other disadvantage Americans — whose parents paid into the system for generations — can afford to go to school and enjoy all the same benefits you did.

Actual Americans, who don’t simply “feel” they’re American, are drowning in debt and losing their birthrights because people like your parents came here illegally to collect the welfare meant for them. Show how much you care by paying them back the favor and helping them pursue their dreams.