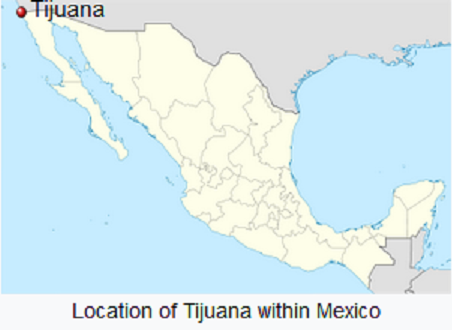 Is this Mexico’s revenge against President Trump’s construction of a wall along our southern border?

Tijuana is a Mexican city located on the Gold Coast of Baja California, with a population of 1,696,923 as of 2015. Located on the Mexican-Californian border, Tijuana is part of the international San Diego–Tijuana metropolitan area.

Joshua Emerson Smith for the Los Angeles Times, March 1, 2017, that California’s state and local officials believe a massive sewage spill in Tijuana that is polluting beaches in San Diego County this month may have been no accident.

In a preliminary estimate, officials said about 143 million gallons of raw sewage spewed into the Tijuana River during a period of more than two weeks that ended Thursday, March 1. While cross-border sewage spills of a few million gallons are routine for the region, this is one of the largest such events in the last two decades, according to water quality experts in San Diego.

People from Tijuana to as far north as Coronado, a resort city in San Diego County, have been complaining of foul odors for weeks, prompting lawmakers in San Diego County to contact federal regulators as well as agencies in Mexico.

The U.S. regulators said their Mexican counterparts have given little explanation, neither have Mexican officials responded to L.A. Times‘ requests for comment.

Serge Dedina, mayor of Imperial Beach, a residential beach city in San Diego County, said he tried to get answers from officials on both sides of the border for more than a week with no response. Dedina said:

“This was like a tsunami of sewage spills. What’s worse is it looks to me like this was deliberate. It saves [the Mexican agencies] a lot of money in pumping costs, and ultimately, they can get away with it and do it all the time, just on a much smaller scale.”

The toxic discharge is estimated to have happened from Feb. 6 through March 1, while repairs were made to a major sewer pipe near the confluence of Mexico’s Alamar and Tijuana rivers, according to the U.S. side of the International Boundary and Water Commission. Baja California’s State Public Service Commission maintains the sewer-system infrastructure in that area.

“They basically said it was a bypass of raw sewage into the Tijuana River during the rehabilitation of a large sewer pipeline in Tijuana,” said Lori Kuczmanski, spokeswoman for the U.S. side of the commission, which oversees international water treaties with Mexico, among other things.

By Tuesday, U.S. officials said their Mexican counterparts still offered only scant details of the situation. They also said Mexico didn’t give them advance notice of the sewer-pipe repair project.

“Was the spill intentional? Well, yeah. It appears they were working on the pipeline. I don’t believe that it was a question of it failing. At least a notification would be a good neighborly thing to do, to let us know what was coming down the river before it got here so we could alert the public.”

Gibson said a similar project in the United States would include efforts to prevent sewage from flowing downstream by using booms and then pumping the diverted sewage back into the wastewater system.

This tsunami of sewage spill is an environmental disaster. Where are California’s vaunted greenies?

To give you a sense of the magnitude of Mexico’s sewage dump, let’s compare it to the Gulf of Mexico oil disaster of 2010.

The Tijuana sewage spill is an act of war by the government of Mexico.