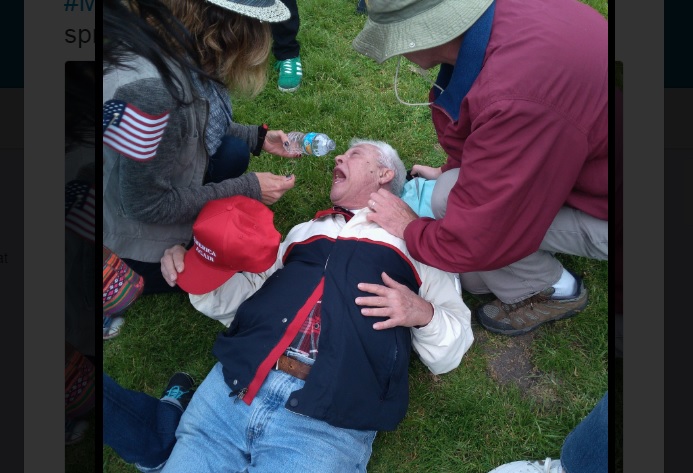 President Trump supporters holding a “March 4 Trump” in free speech hating Berkeley, California were violently attacked and pepper-sprayed by left-wing terrorists, many of whom are reportedly members of “By Any Means Necessary.”

This left-wing terrorist group, including one of their leaders Yvette Felarca, was caught on camera last year instigating violence at a far-right rally in Sacramento. The same group also helped organize the violent riots at Berkeley last month.

Clashes between opposing political camps erupted in Berkeley, California, as Trump supporters and opponents squared off under the watchful eye of police in riot gear.

People participating in the “March 4 Trump” demonstration, to show support for President Donald Trump, were met by a “By Any Means Necessary” counter-demonstration group in downtown Berkeley on Saturday afternoon.

Dozens of rival activists stood face to face, chanting at each other “No racist, fascist USA” and “Build the wall,” before violence erupted.

The police contingent, deployed to the scene for security following last month clashes failed to intervene when the first punches were thrown at about 2pm, local time, East Bay Times reports.

Here we go again. Not the first fight that's broken out at the #trump rally in #Berkeley. pic.twitter.com/ZPW6QbI5S1

While it is unclear who started the fight, which involved roughly a dozen people from both camps, riot gear police allowed the scuffle to play-out. A half-hour later, another fight flared up, followed by smaller, sporadic scuffles, which the publication noted involved mostly anti-Trump protesters.

Smoke bombs were also thrown by the protesters.

About 50 people have their faces covered – both pro and anti Trump. #berkeley .@KTVU pic.twitter.com/ZazUqCcUyu

There’s been two to three fist fights that police officers had had to intervene in, BPD spokesperson Office Byron White told The Daily Californian news. By 3 pm, the opposing camps began pepper spaying each other.

The spokesman added that Berkley PD received at least one report of a person who was pepper-sprayed by another individual in the crowd. In addition, one person was injured and some of his teeth knocked out. Overall, there’s been ten arrests and three injuries, Berkeley Side News reports.

Police say 10 arrests at #berkeleyprotest. Most of those still in Civic Center Park appear to be #antifa or #BAMN: https://t.co/g3gmToQkn0

And, like clockwork, fights break out by wall. Police attending to someone hurt. #berkeleyprotests pic.twitter.com/A7LLFb77un

White said that most police officers are armed with batons, pepper spray, rubber bullets and smaller impact projectiles that they can use to mark particular agitators.

“Right now we’re continuing to monitor the situation,” White said. “People who are attending this event, they should know that, yes, we are video recording as well â€¦ So we are not just in the park itself but we’re also looking to potentially identify people in the future if we cannot identify them today.”

Firecrackers, blood, smoke, in the streets of #berkeley #March4Trump pic.twitter.com/OZhMKVGKBZ

During the skirmish, a journalist taking still photographs, was hit in the face and needed medical treatment, KTVU reports.

The rally proceeded to the University of California, Berkeley campus where organizers planned to meet at 3pm, according to police.

Protesters tell police to "do their job" as fights break out #March4Trump #berkeley @XpressNews pic.twitter.com/8xCdAHR0ML

Berkeley police department had been in touch with organizers of both events prior to the demonstrations. Fearing a repeat of last month’s violence, Sgt. Andrew Frankel confirmed to NBC Bay Area news that “the department is prepared for a number of different contingencies.”You can see from the videos they took forever to intervene. Odds are they received another stand down order from their communist Mayor or female police chief.

These left-wing terrorists pepper-sprayed an old man in the face.

Normal Americans HATE the violent left as they burn another flag at #Berkeley…
pic.twitter.com/YIlbF6qszP

They also burned an AnCap flag:

One masked thug stole a older man’s hat then punched him when he tried to get it back. A biker was seen smashing the thug over the head with his helmet in response.

Here’s one of these vagrants running from police:

The time is now to cut off all federal funding not only to the University of California, Berkeley, but the entire city of Berkeley.