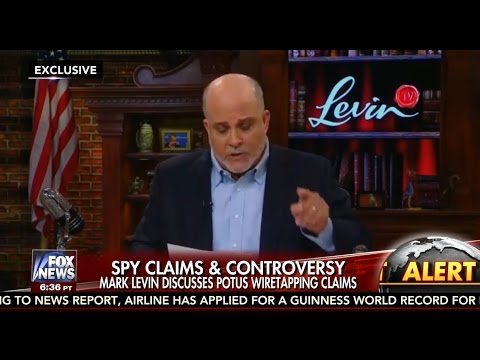 The left-leaning mainstream media has spent the last 48 hours marginalizing Saturday’s Tweets from President Donald Trump indicating that the Obama administration was actively wire tapping phones in Trump Tower ahead of the November election. Jokes, insults and spin have been the order of the day as popular liberal mouthpieces have trashed the President, his staff and radio host Mark Levin who initially broke the story earlier in the week.

But no matter how much they spin, it is becoming crystal clear that President Obama’s administration did, in fact, involve themselves in electronic spying of Trump and his surrogates in an effort to link him to Russian influence.

Levin, who was  referred to as a ‘hack’ on CNN this Saturday, was no die-hard supporter of Trump during the campaign season. As a Constitutional attorney, the radio host is often found making well documented arguments on his show. In an interview with Fox & Friends on Sunday, Levin hit back at those who deny any involvement into wire tapping of Trump’s staff by the Obama White House.

The evidence, as you’ll see in the video segments below, is simply undeniable and lays  out a devastating case utilizing publicly available documents and investigations that prove without a shadow of a doubt that President Obama inserted himself into a free election in an effort to stifle and delegitimize Trump’s Presidential aspirations. Six federal agencies were involved, including FBI, CIA, NSA, DOJ, Treasury Department Financial Crimes Enforcement Network and the Director of National Intelligence:

The evidence is overwhelming… this is not about President Trump’s tweeting… this is about Obama’s spying… And the question isn’t whether it spied… we know they went to the FISA court twice… it’s the extent of the spying… that is, the Trump campaign, the Trump transition, Trump surrogates… and I want to walk you through this, the American people… this is all public…

The evidence, much of it sourced from anti-Trump mainstream websites, shows that President Trump was right on target with his claims on Saturday that Obama was directly involved.

The reaction on social media was almost instant:

Just watch Mark Levin on FOX. He has the proof of what Trump said. It's true. He proves it with the newspaper reports. Love the Great one

Following Levin’s report, we’re left with the same question for President Trump that we had yesterday when we noted that Barrack Obama actually tapped all of our phones. President Trump, what are YOU going to do about it?