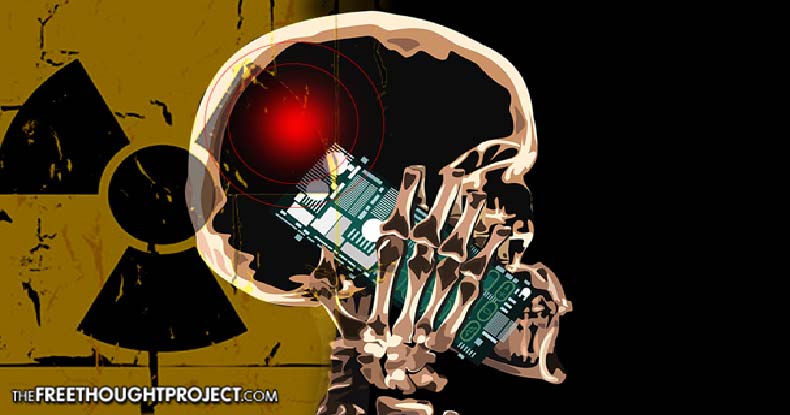 After years hidden from the public, California Department of Public Health officials have finally released a draft document outlining health concerns stemming from cellphone radiation — including multiple cancers and infertility.

“We have evidence of brain tumors and other head and neck tumors. We also have evidence of sperm damage in males, infertility in females,” explained Joel Moskowitz of U.C. Berkeley’s School of Public Health, who sued the state in 2016 under the California Public Records Act to obtain the information.

Although the Department of Public Health ultimately chose not to publish the document — both pages have since been emblazoned with “Draft and Not for Public Release” — its content is of critical import to cellphone users around the planet.

San Francisco affiliate ABC7 reports, “Moskowitz says there’s been a lot of pressure from the wireless industry to keep any kind of negative report on cellphones hidden from the public,” and, he notes,

“[T]hey’ve done a very good job at it, essentially following the same playbook that the tobacco industry used.”

Moskowitz’ conclusion seems apt. Despite the matter-of-fact tone with which the nature of cellphone health threats is presented, the document — appropriately titled “Cell Phones and Health” — reads more like a checklist for phone usage.

Following several simple guidelines parsed out by health officials could help prevent the development of brain and other cancers, as well as other afflictions. In fact, basic protocols like holding the phone at a distance, switching to speakerphone, or, most preferably, using headphones for conversations can all help reduce risk.

And CDPH’s Division of Environmental and Occupational Disease Control believes sufficient reason exists to be concerned, as the document states,

“Cell phones, like other electronic devices, emit a kind of energy called radiofrequency EMFs (electromagnetic fields). Health officials are concerned about possible health effects from cell phone EMFs because some recent studies suggest that long-term cell phone use may increase the risk of brain cancer and other health problems […]

“Several studies have found that people with certain kinds of brain cancer were more likely to have used cell phones for 10 years or more. Most of the cancers were on the same side of the head that people usually held their phones. Although the chance of developing brain cancer is very small, these studies suggest that regular cell phone use increases the risk of developing some kinds of brain cancer. Some studies have also linked exposure to EMFs from cell phones to fertility problems. As more studies are done and we learn about possible risks for cancer and other health problems linked to cell phone use, the recommendations on this fact sheet may change.”

Where the government chose a painfully neutral tone to discuss the gravity of possible side effects, others have been warning about the perils of cellphones for years.

“People need to know, people are unaware that cellphones as they are used now are not safe,” Ellie Marks of the California Brain Tumor Association, told ABC7.

EWB reports officials from the Centers for Disease Control and Prevention deny succumbing to pressure from the mobile phone industry — but nonetheless, the information in the health document could have been put to better use with a full, public release. As EWB continues,

“In human epidemiological studies, cell phone use has been linked to an increased risk of brain and salivary gland cancers. Studies from teams of scientists in several nations have raised troubling questions about possible associations between heavy cell phone use and altered brain metabolism, sleep disturbance, and even diminished sperm count and sperm damage. In 2011, the World Health Organization declared cell phone radiation a possible carcinogen.

“Animal studies support the findings in people. A multi-year study from the U.S. National Toxicology Program found that male rats exposed to radio-frequency radiation from before birth through two years of age had a greater chance of being diagnosed with a brain cancer called malignant glioma, as well as developing a tumor found on the heart. The radiation levels to which the rats were exposed included levels that current cell phones are allowed to emit.”

EWB emphasizes more research and study must occur before the extent of risks from cellphones can be fully assessed, but cautioned sufficient evidence has been found in previous studies to be trepidatious about current FCC rules regarding the ubiquitous devices.

In the meantime, CDC and California health officials continue calling for further research — without releasing guidelines that offer at least minimal guidance for the least risky use of a cellphone.

“This could have perhaps saved some lives if it had been published by the department seven years ago,” Moskowitz lamented. “It’s disconcerting it has taken so long to issue this. And still, they are making it clear this isn’t their official position.” 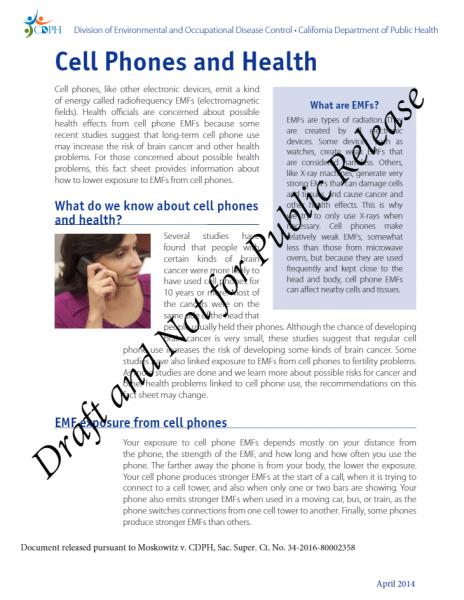