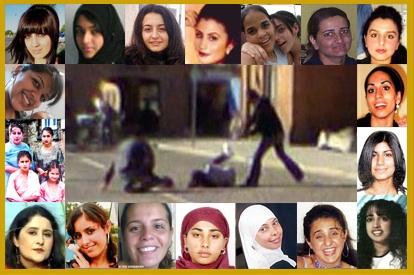 It’s not just Muslim migrants, for years we have long suspected the cover-up of Islamic honor killings in America. I have tried for years to determine how many young Muslim girls died in the US, and under what circumstances. There is no central data bank with that sort of information. We know the media refuses to call it what it is; do we believe that law enforcement would? The Pentagon can’t even say jihad. Well, maybe now…. under Trump.

The higher-ups in law enforcement and government are scrubbing the horrific crime of honor killing. Fatima Abudallah was honor murdered in Florida.  We worked furiously to get justice for Fatima. Sharia ruled. This points to the continued diminishment of women in the West by the introduction of Islamic cultural mores and practices.

Covering up what should be a capital crime demands a special investigation —- stealth sharia enforcement.

This lets the government “be more transparent with the American people and to implement more effectively policies and practices that serve the national interest,” the order states. Department of Homeland Security Secretary John Kelly and U.S. Attorney General Jeff Sessions must work together to provide the public with a report on foreign nationals charged with and convicted of terrorism-related offenses, including those who associate with or provide support to terrorist organizations.

The order also instructs the government to release information on honor-killings. The government will now track cases involving foreign-born individuals who commit “gender-based violence against women,” or honor killings. Honor killings are a brutal practice wherein Muslim males will murder or mutilate female family members accused of bringing shame and dishonor to their families and Islam. Like female genital mutilation, it is a practice that would not exist in the U.S. without mass immigration bringing its practitioners into U.S. communities.

“Cases of honor killings and/or violence in the U.S. are often unreported because of the shame it can cause to the victim and the victim’s family. Also, because victims are often young women, they may feel that reporting the crime to authorities will draw too much attention to the family committing the crime,” former U.S. government analyst Farhana Qazi explained to Fox News in November 2015.

The order requires the government to release its inaugural report by September 2017, close to the sixteenth anniversary of the 9/11 terror attacks committed by Islamic foreign nationals admitted to the U.S. on various visas. Reports shall be issued every six months from then on.

A 2015 report detailing honor killings can be read here.