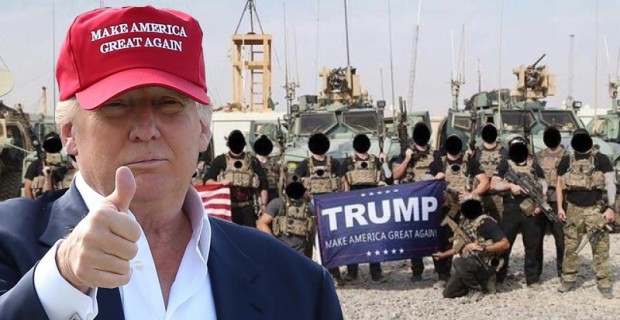 Retired and active duty military veterans are launching a national movement to show support for Donald Trump in a similar vein to how they opposed the Obama administration’s war in Syria back in 2013.

The hysterical left has aligned with rogue, partisan elements of the intelligence community and the military-industrial complex in a bid to topple Trump before he can make good on any of his promises.

With the media now acting as the opposition party to Trump while the deep state and Barack Obama scheme to sabotage and eventually overthrow his embryonic administration, real Americans are standing up for what they believe in with a visceral show of solidarity.

The left is trying to smear Trump as a traitor using bogus claims about non-existent links with Russia, when in reality, polls show that Trump enjoys strong support from members of the military precisely because of his America first anti-globalist foreign policy agenda and his refusal to feed them into the meat grinder of destructive, endless wars.

Now military members are already posting images expressing their strong support for Trump in the face of all these attacks.

#VetsForTrump
I support our president, and his efforts to save the Republic. I urge my fellow vets to do the same pic.twitter.com/z8x23M8YAN

The campaign is reminiscent of a similar movement back in 2013 when numerous active duty military personnel posted images of themselves in uniform on social media asserting that they would not be used as Al-Qaeda’s air force when the Obama administration was on the verge of using military action to support jihadist rebels in Syria.

We encourage all veterans and active duty military personnel to show their support for Trump by posting images of themselves in uniform on Twitter under the hashtag #VetsForTrump holding a sign that says #VetsForTrump or any other pro-Trump message. Feel free to obscure your face if you are not comfortable revealing your identity.

All images we receive will be posted in this article and elsewhere.