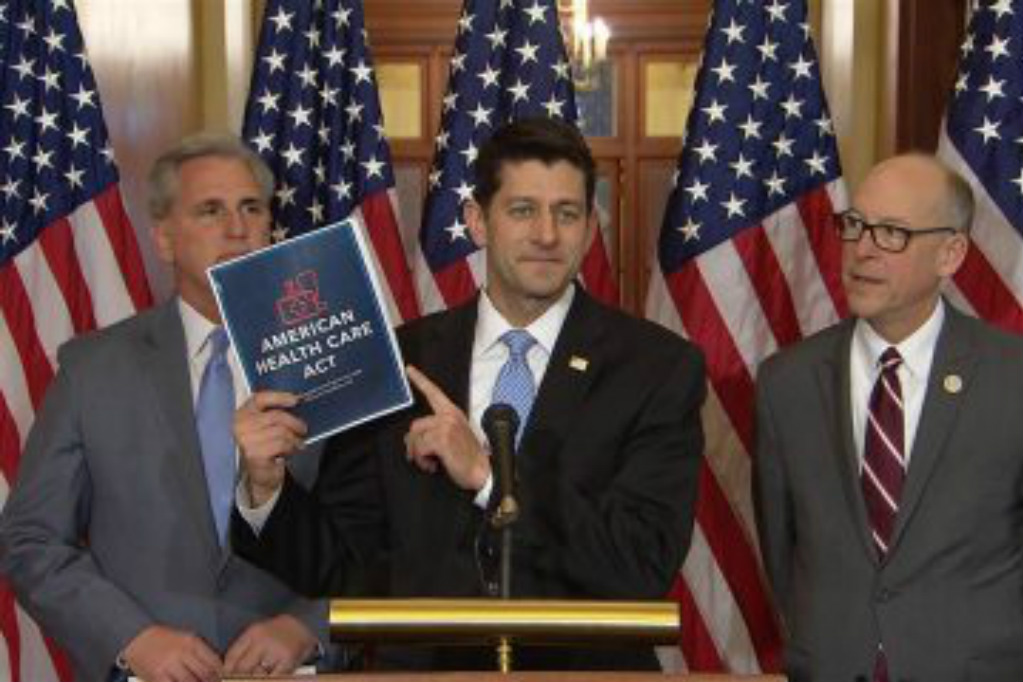 Anyone paying attention to the Republicans in Washington knew this was coming. They promised to repeal the Affordable Care Act, aka Obamacare. That’s where they should stop, with a full repeal. However, they claim to want to repeal it, but their bill doesn’t even come close to doing that. Furthermore, they expand their socialistic tendencies in many areas within the bill. I’m not even going to call it Obamacare Lite. This is full on RINOCare (Yes, I just coined it).

“The American Health Care Act is a plan to drive down costs, encourage competition, and give every American access to quality, affordable health insurance. It protects young adults, patients with pre-existing conditions, and provides a stable transition so that no one has the rug pulled out from under them,” House Speaker Paul Ryan said in a statement.

Understand, before I go further, it is not Washington’s job, nor were they given authority, to protect young adults nor patients with pre-existing conditions. It is their job to make regular commerce between the states, but that’s not what they are doing in this bill.

Yet, the White House praised the bill.

“Obamacare has proven to be a disaster with fewer options, inferior care, and skyrocketing costs that are crushing small business and families across America,” Spicer said in a statement. “Today marks an important step toward restoring health care choices and affordability back to the American people. President Trump looks forward to working with both Chambers of Congress to repeal and replace Obamacare.”

The legislation would repeal ObamaCare taxes, along with the individual and employer mandates. Both of those imposed tax penalties for not buying and offering insurance. The bill would also repeal Obamacare subsidies and replace them with tax credits for consumers.

However, the bill also looks to penalize people up to 30 percent of their premium for leaving gaps in their insurance coverage.

Then there are the tax credits. By the way, if you don’t understand how the tax system works, it’s there to manipulate you to do things you normally wouldn’t do. The Washington Post comments on the tax credits.

The bill would replace the premium tax credits and cost-sharing subsidies in the Affordable Care Act with a flat tax credit, based on age. Currently, only people who make between 138 percent and 400 percent of the federal poverty limit are eligible for tax credits that defray their premiums. The size of the credits are pegged to people’s incomes and the cost of a benchmark plan in the marketplace where they’re buying insurance. That helps account for the fact that the average premium can vary widely depending where a person is buying insurance.

The new tax credit would gradually peter out for people who make more than $75,000 a year or $150,000 for a couple, but it ignores the fact that care costs more in different geographical regions or that someone who makes $20,000 a year might be more strained in trying to buy an insurance plan with the same amount of financial help as someone who makes $74,000. The graph below shows how a flat tax credit would do little to defray the monthly cost of insurance in markets where health insurance is more expensive.

Additionally, subsidies for insurance companies to help people pay for their insurance that they were mandated to purchase, but couldn’t afford (imagine that under a piece of pretended legislation called the Affordable Care Act), will continue along with other tax credits for four more years!

The bill does some easing to allow insurers the ability to design health coverage, but still maintains 10 categories of health benefits that must be covered.

Again, that is free market. It is a controlled market. What if people just want catastrophic insurance? Sorry, you are just out of luck because government knows better than you and mandates insurance companies must comply with their controls on them.

“From a conservative’s perspective, there are a number of things that need further refinement,” Rep. Mark Sanford (R-SC) said. “This notion of a refundable tax credit is a big deal, Medicaid expansion is a big deal, the Cadillac tax is a big deal.”

“I don’t think it’s ever going to arrive in the Senate. I think it’s dead on arrival in the House,” Senator Rand Paul (R-KY) told CNN.

“This is not the Obamacare repeal bill we’ve been waiting for. It is a missed opportunity and a step in the wrong direction,” Seantor Mike Lee (R-UT) said in a statement. Lee added that it was “exactly the type of back-room dealing and rushed process that we criticized Democrats for.”

Keep in mind, President Donald Trump told us we would love this bill. From the word I’m getting, it sounds like people believe they’re are about to get Obamacare 2.0 and they are encouraging Trump to veto the bill, providing it even makes it to his desk.Vice President Mike Pence called it a “framework” and Health and Human Services Secretary Tom Price referred to it as “a work in progress.”

Friends, this is a bad bill from a bunch of people that have shown to be just as much your enemy as the Democrats. This bill can aptly be named “Ryancare,” or more appropriately, “RINOCare.”