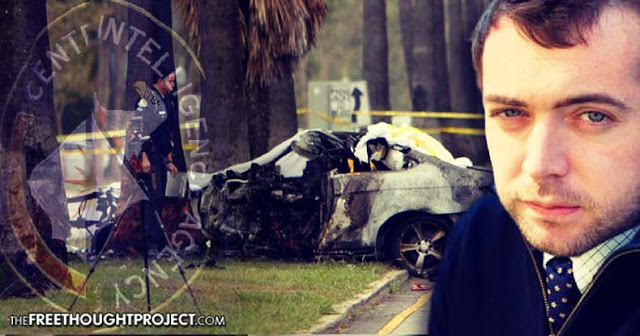 Award-winning journalist Michael Hastings garnered international acclaim for coverage of the Iraq War and had established a comfortable career with BuzzFeed, GQ, and Rolling Stone when his life abruptly ended in a fiery one-car crash under such suspicious circumstances, a prominent national security official claimed it was “consistent with a car cyber attack.”

“There is reason to believe that intelligence agencies for major powers,” including the United States, have developed the technology to remotely seize control of a vehicle, former U.S. National Coordinator for Security, Infrastructure Protection, and Counter-terrorism Richard A. Clarke told Huffington Post shortly after Hastings’ death in June 2013.

“You can do some really highly destructive things now, through hacking a car, and it’s not that hard.”

Now — with Wikileaks’ release of the voluminous cache of Central Intelligence Agency documents known as Vault 7 — it seems Clarke has been proven correct.

“As of October 2014 the CIA was also looking at infecting the vehicle control systems used by modern cars and trucks,” Wikileaks writes. “The purpose of such control is not specified, but it would permit the CIA to engage in nearly undetectable assassinations.”

A number of inconsistencies and questions still surround the journalist’s sudden demise, despite the official ruling of accidental — but, perhaps, the CIA revelations offer the most feasible explanation.

Neighbor and eyewitness to the peculiar crash, Jordanna Thigpen, told LA Weekly Hastings had been acting erratically — convinced helicopters frequently nearby were spying on him — and told her his Mercedes had been meddled with in the days just prior to his death.

“He was scared,” Thigpen told the publication, “and he wanted to leave town.”

Friends of Hastings concurred with the assessment he’d appeared increasingly agitated and tense just before the putative accident, and worried the government had been spying on him.

In the predawn hours on June 18, 2013, Hastings’ Mercedes was captured on CCTV and witnessed by a few people flying at top speed through the Hancock Park area of Los Angeles, leaving a trail of sparks and flames before slamming directly into a palm tree and exploding into flames.

Burned beyond recognition, the medical examiner identified the 33-year-old journalist through a fingerprint match in the FBI database.

Although trace recreational substances were detected in Hastings’ system, the coroner found that could not have impaired the driver or caused the accident.

One security video purportedly showed a large flash of bright light occur prior to impact — an account backed by a witness who told San Diego News 6 an explosion came before the car hit the tree — leading some to believe the car had been purposefully blown up.

“An explosion before impact, which would slow down the vehicle, would explain the minimal damage observed on the palm tree,” Jerome Corsi wrote for WND. “Other physical evidence at the crash site also is not consistent with a high-speed, out-of-control impact.”

To understand why the CIA would have interest in the targeted assassination of a journalist, it’s necessary to understand the impact an uncensored, transparent press can have on those in power.

Hastings rose to prominence with reporting on the Iraq War for Newsweek, but it was an exposé for Rolling Stone in 2010, “The Runaway General,” on General Stanley McChrystal, commander of NATO’s International Assistance Security Force in the Afghanistan War that earned the George Polk Award — and ultimately cost the general his career.

Beyond McChrystal and the military, Hastings had grown sharply critical of the Obama administration and the Democrat Party, and developed a decided consternation for and preoccupation with the U.S. government’s surveillance of journalists.

In fact, Hastings’ last article for BuzzFeed bore the title, “Why Democrats Love To Spy On Americans.” He summarized, “Besides Senators Ron Wyden and Mark Udall, most Democrats abandoned their civil liberty positions during the age of Obama. With a new leak investigation looming, the Democrat leadership are now being forced to confront all the secrets they’ve tried to hide.”

Whether a covert government operation to seize control of Hastings’ vehicle actually took place will almost certainly never be known, but that the CIA discussed improvements to the same technology in 2014 indicates it would have been available.

Hastings tried to warn the nation about infringements against the free press by the insidious network of agencies ostensively tasked with maintaining national security — but did he pay the ultimate cost?

“So if there were a cyber attack on the car — and I’m not saying there was,” Clarke, the security official, told HuffPost, “I think whoever did it would probably get away with it.”