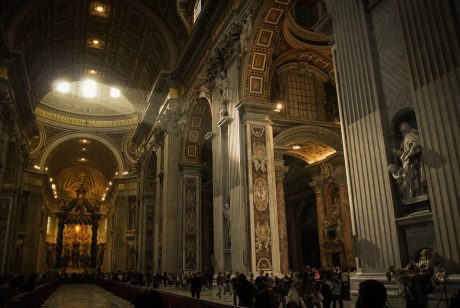 We aren’t supposed to talk about what goes on behind closed doors when the cameras are off and the public can’t see what is happening. There is corruption in virtually every large organization, but those that hold themselves out as “spiritual leaders” need to understand that they are going to be held to a higher standard than everyone else. And when those “spiritual leaders” greatly violate the trust that the public has put in them, the fallout can be absolutely devastating. In this article you are going to read about some things that are deeply disturbing. An immense wave of evil has swept through major religious organizations, and the Catholic Church is certainly no exception.

Most people know that Catholic priests are supposed to be celibate, but most people also know that this is often not the case. But what some priests in Italy has been involved in is shaking the Vatican to the core. The following comes from USA Today…

What was that priest thinking?

Surely he had to know that this stuff would come out eventually.

But often those in positions of power convince themselves that they can cover up their scandals forever. Of course usually it doesn’t end up working that way.

In the northern city of Padua, a 48-year-old priest, the Rev. Andrea Contin, is facing defrocking as well as judicial proceedings amid accusations he had up to 30 lovers, some of whom he took to a swingers’ resort in France.

Initially Contin tried to deny the charges, but now so many women have come forward that he can’t lie anymore.

He is accused of farming out some of his lovers to men on wife-swapping websites, according to The Times.

“He always carried a briefcase full of vibrators, sex toys, masks and bondage equipment,” one of his accusers said in her police statement, according to the Corriere del Veneto.

She also accused Mr Contin of encouraging her to have sexual relations with a horse and beat her in the rectory on two occasions.

It would be tempting to dismiss these latest reports as “isolated anomalies” if so many similar reports had not surfaced in recent years. Sexual immorality appears to be running rampant among the clergy, and this is particularly true among the priests that are gay. The following comes from an outstanding article that was published by Vanity Fair…

At the Vatican, a significant number of gay prelates and other gay clerics are in positions of great authority. They may not act as a collective but are aware of one another’s existence. And they inhabit a secretive netherworld, because homosexuality is officially condemned. Though the number of gay priests in general, and specifically among the Curia in Rome, is unknown, the proportion is much higher than in the general population. Between 20 and 60 percent of all Catholic priests are gay, according to one estimate cited by Donald B. Cozzens in his well-regarded The Changing Face of the Priesthood.

Even if the true figure is near the low end of that estimate, that still means that one out of every five Catholic priests is gay.

Like many in the Protestant world, quite a few of these priests will preach Jesus on Sundays and lead a secret “double life” the rest of the week…

A few keep their sexuality entirely private and adhere to the vow of celibacy. Many others quietly let themselves be known as gay to a limited degree, to some colleagues, or to some laypeople, or both; sometimes they remain celibate and sometimes they do not. A third way, perhaps the least common but certainly the most visible, involves living a double life. Occasionally such clerics are unmasked, usually by stories in the Italian press. In 2010, for the better part of a month, one straight journalist pretended to be the boyfriend of a gay man who acted as a “honeypot” and entrapped actual gay priests in various sexual situations.

Another scandal in the Catholic Church that is making headlines lately comes out of Ireland. Authorities say that they have discovered the “remains of babies” in the sewers of a home for unwed mothers that the Catholic Church was operating. One historian believes that 800 children may have died there…

The remains of babies, ranging from new-born to three-years-old, have been found in the sewers of a former church-run home for unmarried mothers in Ireland, the government said on Friday.

A report from an inquiry the government ordered in 2014 backed up a historian’s claim that up to 800 children may lie in an unmarked grave at the home. It said: “significant quantities of human remains have been discovered in at least 17 of the 20 underground chambers which were examined.”

Radiocarbon dating found the remains, which ranged from 35-week-old fetuses to 3-year-olds, dated from between 1925 and 1961, when the home was run by the Bon Secours Sisters.

And it is believed that similar things were going on at other church-run homes. In fact, law enforcement is currently investigating 17 other facilities.

We are living at a time when there is great apostasy in the Christian world.

But if you stand up and preach righteousness and holiness, you will almost certainly get attacked, and in some countries there is even a chance that you will be thrown into prison.

For example, consider what just happened in the United Kingdom…

In what their lawyer calls a “modern-day heresy trial,” a British court has convicted two street preachers of a public order offense for preaching the Bible in public.
The public prosecutor in the case claimed that publicly quoting parts of the King James Bible in modern Britain should “be considered to be abusive and is a criminal matter.”

So what did they say that was so bad?

Well, apparently one of the things that authorities were extremely concerned about is the fact that they were claiming that Jesus is the only way to God…

Prosecutor Ian Jackson also told the court, “To say to someone that Jesus is the only God is not a matter of truth. To the extent that they are saying that the only way to God is through Jesus, that cannot be a truth.”

I was absolutely stunned when I read that, but none of us should be surprised.

We always knew that great persecution of true believers was coming, and now Christians are actually being put in prison in the western world for simply sharing the gospel publicly.

In times of great darkness, light is needed more than ever, but often there is a great price to be paid for being a light.