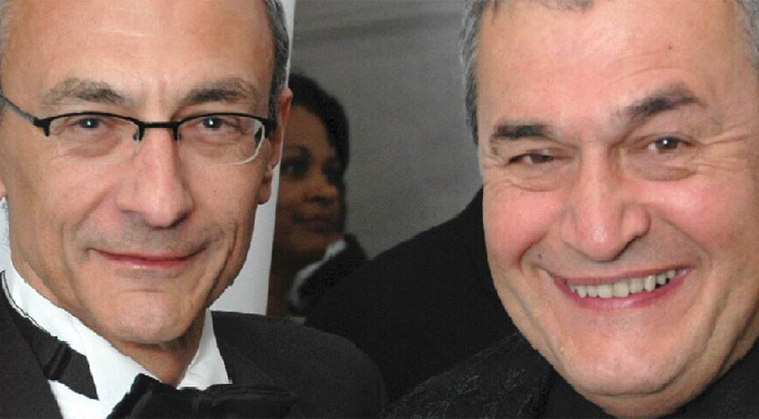 While the Obama administration passed sanctions against Russia’s largest bank, Sberbank, the bank has hired John Podesta’s “Podesta Group” lobbying firm to have them removed.

Russia’s largest bank, Sberbank, has confirmed that it hired the consultancy of Tony Podesta, the elder brother of John Podesta who chaired Hillary Clinton’s presidential campaign, for lobbying its interests in the United States and proactively seeking the removal of various Obama-era sanctions, the press service of the Russian institution told TASS on Thursday.

Previously, The Daily Caller reported that Tony Podesta was proactively lobbying for cancellation of a range of anti-Russian sanctions against the banking sector. In particular, he represented interests of Sberbank and was paid $170,000 for his efforts over a six-month period last year to seek to end one of the Obama administration’s economic sanctions against that country. Podesta, founder and chairman of the Podesta Group, is listed as a key lobbyist on behalf of Sberbank, according to Senate lobbying disclosure forms. His firm received more than $24 million in fees in 2016, much of it coming from foreign governments, according to the nonpartisan Center for Responsive Politics.

Former President Barack Obama imposed the Russian sanctions following the break out in violence in east Ukraine in 2014.

The two Russian banks spent more than $700,000 in 2016 on Washington lobbyists as they sought to end the U.S. sanctions, according to Senate lobbying disclosure forms and documents filed with the Department of Justice.

The Podesta Group charged Sberbank $20,000 per month, plus expenses, on a contract from March through September 2016.

Both Sberbank and VTB Capital have faced severe cash shortages due to plunging oil prices, plus the U.S. sanctions. If Obama’s sanctions were lifted, however, both banks could legally seek funds from American financial institutions. The lobbying campaign targeted Congress and the executive branch, with Podesta and other lobbyists arranging at least two meetings between Sberbank officers and Department of State officials, according to Elena Teplitskaya, Sberbank’s board chairman, who spoke to House aides in August.

“The Democrats are sitting there trying to convince us that the Russians are trying to throw the election to Trump,” a congressional aide who requested anonymity and met Teplitskaya told TheDCNF.

“And then they’re with us here in the House and meeting directly with the administration behind closed doors on the issue of the sanctions. The hypocrisy could not be any richer,” he said.

As the Caller puts it, “the discovery of high-profile Democrats like Podesta being paid lucrative fees for lobbying to lift U.S. sanctions on Russia contrasts with charges from Democrats that President Donald Trump and his key aides are soft on Russia while the Obama administration was tough on Moscow.”

The Daily Caller also reported on Tuesday that Tony Podesta “failed to register under the Foreign Agent Registration Act (FARA) when he agreed to represent Sberbank, Russia’s largest bank.”

This is pretty much extortion. They know the Podestas are the most heavily connected lobbyists in Washington, so they’re forced to hire them. Obama’s sanctions guaranteed them their business. There’s probably hundreds of more cases just like this. Attorney General Jeff Sessions should launch an investigation.