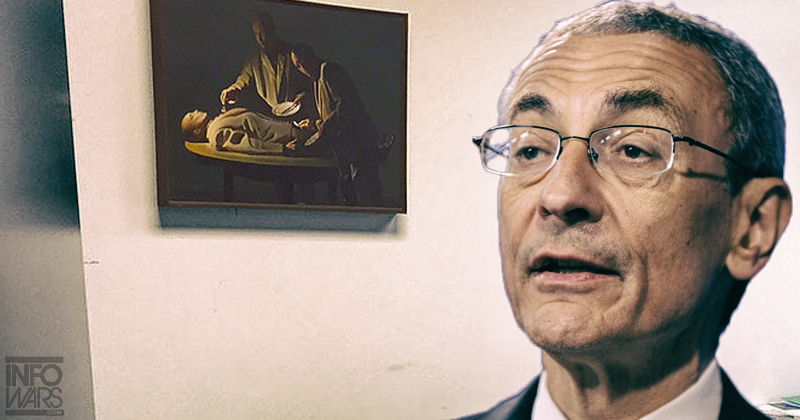 The dictionary defines “meme” as “an idea, behavior, style, or usage that spreads from person to person within a culture ” — in other words, meme is something that becomes popularized in a culture.

Have you noticed that cannibalism has become a meme in our sick culture? —

(1) Zombies are a popular theme in movies and TV. Zombies cannibalize.

(2) There’s that cannibalism oil painting with which the Podesta brothers, John and Tony, are so enthralled (see “Hillary’s campaign chairman John Podesta has cannibalism painting in his office”).

In the painting, two men, with knives in hand and a plate ready, are about to carve into and consume another.

(3) The Podesta brothers’ fascination with cannibalism is not limited to the painting. They were invited by satanic “artist” Marina Abramović to her “spirit cooking” dinner — an occult sex ritual involving menstrual blood, urine, sperm and breast milk. Ingestion of human blood is a form of cannibalism. (See “Evidence that Hillary Clinton and her associates are satanists“)

(4) Then there’s that “performance art” event at the 2011 annual gala of the Museum of Contemporary Art, organized by Abramović and pop singer Debbie Harry, in which participants, including Hollywood “celebrities” like Pamela Anderson, simulated cannibalism by eating pieces of life-size cakes made in the images of Abramović and Harry. (See “Is WikiLeaks founder Julian Assange dead? – the connection with Pamela Anderson“)

(4) The latest pop culture cannibalism is a French horror movie, Raw, about a vegetarian college student who became a cannibal.

At last year’s Toronto International Film Festival during a midnight screening of Raw, reportedly an ambulance was called after several people in the audience passed out from the gore.

Never knew the devil is blonde

Ducournau told Women and Hollywood: “With ‘Raw,’ I set myself the challenge of shifting the audience’s moral standards throughout the film. I wanted the audience to feel empathy for a character that is becoming a monster in their eyes.”

There’s nothing more dehumanizing of oneself and the other than to commit cannibalism, and the devil likes nothing more than to strip us, whom God made in His own image, of our humanity.

The devil must be chortling, as America descends into madness . . . .