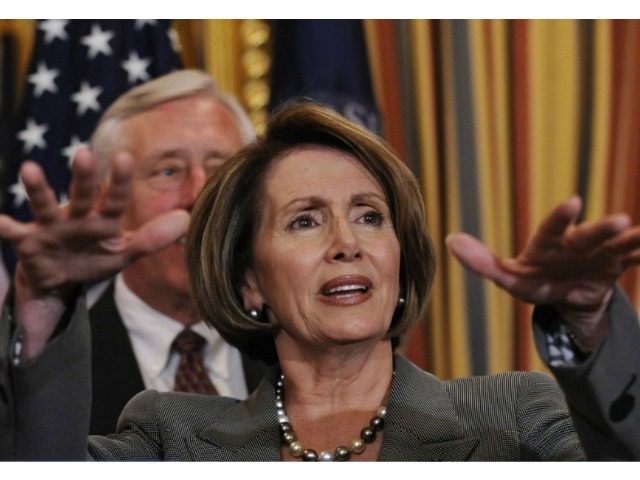 In an utter display of hypocrisy, although what she said is right on, House Minority Leader Nancy Pelosi (D-CA) wrote a letter on Tuesday to Speaker of the House Paul Ryan demanding to know what is in his American Health Care Act.

Why is this hypocrisy? Remember when the same Pelosi said of Obamacare, “We have to pass the bill so that you can see what is in it“?

In 2012, Pelosi claimed to have read the Affordable Care Act. Yes, she actually said she read all of this.

I wonder if she read all the regulations that went along with it.

On Tuesday, Pelosi wrote, “Members must not be asked to vote on this legislation before the CBO and the Joint Committee on Taxation have answered the following questions about your legislation in 2018 and 2019, over the 10-year budget window, and in the decade after: How will this bill measure up to the Affordable Care Act and current Medicaid law on coverage, quality, and cost? And how will it impact Medicare solvency?”

“Mr. Speaker, as a former Chair of both the Committee on Ways and Means and the Budget, you understand the importance of having the numbers as well as anyone,” she continued. “The American people and Members have a right to know the full impact of this legislation before any vote in Committee or by the whole House.”

“These are critical questions and I hope that Republicans will honor their responsibility to the American people both before the Committees vote and before the final bill goes to the House floor,” she concluded.

Now, I am all for reading and knowing what is in the bill. It’s not even a long read Rep. Pelosi. You can read it if you are really interested in doing so, but I think it’s more foaming at the mouth in order to politicize the issue between two parties. Frankly, neither Obamacare nor RINOCare are constitutional. Senator Rand Paul’s bill is closer to being constitutional than either of those bills.

While I’m glad that Pelosi does want to know the contents, it shouldn’t be any trouble to determine now. Though Ryan and the establishment gang didn’t want to reveal the contents at first, their bill has now been made public, so Pelosi can read all she wants.

Personally, I’m not impressed with it, as I knew I wouldn’t be because establishment Republicans simply want to rebrand and take control of it. I do hope that President Donald Trump, as well as his press secretary, will have the wool removed from their eyes to see this is not constitutional nor what the people want from their government regarding their health insurance or care.