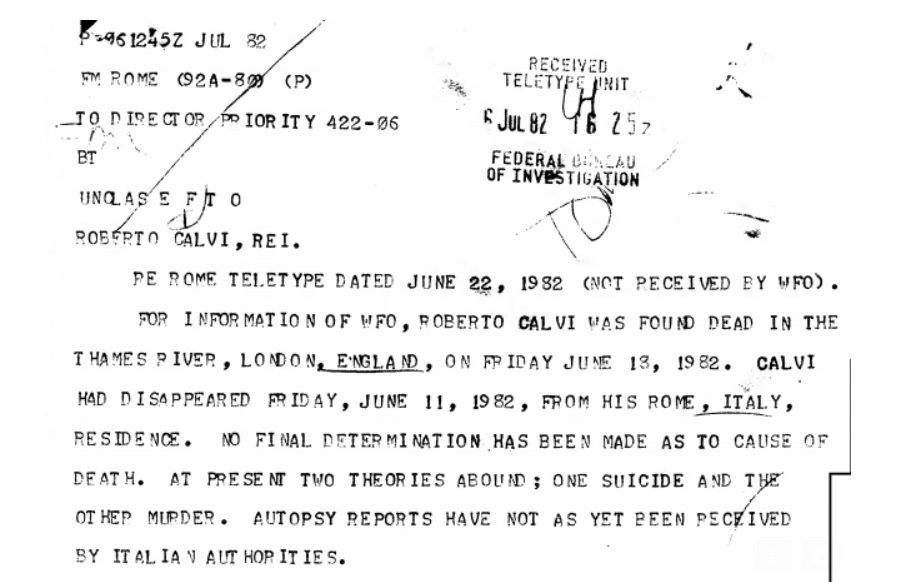 FBI documents recently published by Muckrock show that the FBI was investigating ties between the Vatican, Freemasons and the Mafia. The investigation involved an assassination plot against a Vatican official named Roberto Calvi who was involved in a deep conspiracy involving large sums of money and terrorist operations. Ironically enough, the CIA was deeply involved in this criminal network with the aforementioned parties, which shows that when it comes to clandestine operations, agencies like the CIA and FBI are entirely compartmentalized to the point where one agency can be running a criminal operation without the other agency having any idea of their involvement. Of course, the CIA was not mentioned in these documents, but many researchers over the years have shown that the CIA, the Vatican, The Freemasons, and the Mafia were involved in a long-running program called “Operation Gladio.”

Operation Gladio was a Cold-War program in which the US intelligence community teamed up with these groups in order to stop the expansion of the Soviet Union by carrying out terror attacks that were key points of contention between the US and Soviets. In order to fund the operations, the CIA allowed the Mafia to establish a drug trade in US markets, but restricted the sales to poor and African American communities. The book Operation Gladio: The Unholy Alliance Between the Vatican, the CIA, and the Mafia is an excellent source on this topic.

One of the key roles that the Vatican played in this coalition was to launder the money through their banks, primarily Banco Ambrosiano, an Italian bank, of which Roberto Calvi was the chairman. The Vatican was laundering money through multiple banks and multiple bankers as a part of Operation Gladio for decades. However, these crimes went under the radar until everything came to a head with Banco Ambrosiano and Robert Calvi. Eventually, when the FBI was investigating a branch of the mafia known as La Cosa Nostra in 1981, they stumbled across a connection to Calvi, as shown in the now declassified document below.

Within a year of this report, Italian authorities had charged and convicted Calvi in relation to his financial crimes, but he appealed the charges against him. During his appeal, Calvi was not imprisoned but awaiting his next trial. During that time, he was found dead, hanging from Black Friar’s Bridge above the Thames River. The FBI documented the murder as well, and although they had not come to a definite conclusion, they did decide that the death was either a suicide or perhaps he was murdered by people who he was doing business with, out of fear that he would reveal too many details to the authorities. To make matters even more suspicious, Calvi’s secretary died after falling from a window, just days before Calvi’s death, a fact that was also noted by the FBI. After the death of Calvi, the FBI files get even more strange, with references to “secret masonic lodges” that were involved with the “Vatican Bank.”

Operation Gladio remained a secret from most of the world until the program began to unravel in the early 1990s when Italian authorities began to investigate these connections, exposing the entire operation. And, now, with the release of these new documents, even more light is shined down this ominous rabbit hole.