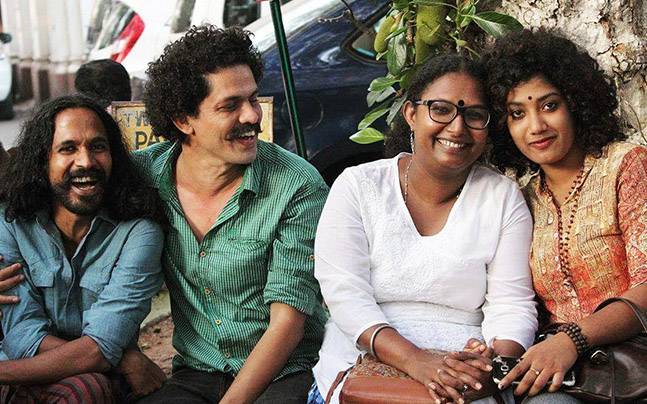 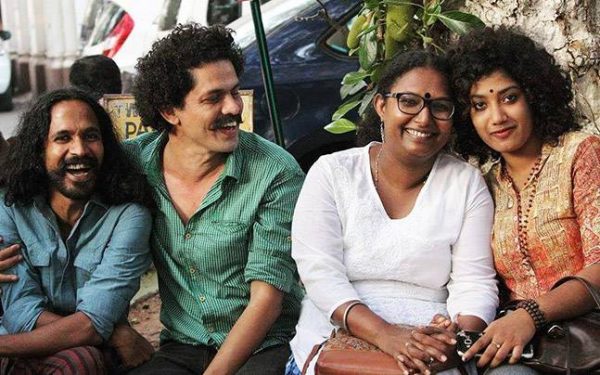 The woman on the far right of this photo is Azniya Ashmin. A Muslim from Kerala, India, this photo of her and sitting with these Hindus caused a firestorm on Facebook, with Muslims calling for dissolving her face in acid as a punishment for ‘barking against Islam’:

Azniya Ashmin, a Bengaluru-based Kerala woman, put up a photo of herself sporting a ‘bindi’ and no hijab, and comments from Muslim fanatics in Kerala flooded the section. While some asked whether she really is a Muslim, one fellow wanted acid thrown in her face if she ‘barks against Islam’.

array of issues ranging from rampant sexism to religious fundamentalism and extremism.
She uploaded a photo of herself on Facebook, posing with three others, two men and one other woman, on February 16 and within no time, comments started pouring in. Captioned what translates to English as “only love”, the photo shows Ashmin sitting with friends, sporting a ‘bindi’ and not wearing a hijab.

Azniya, did not hold herself back. Through sarcastic replies, she hit back at those who are criticising her choice of lifestyle and went on to critique Islamic fundamentalism and moral policing in general.

Ego hurt more than an average man can take, one fellow, whose Facebook profile goes by the name ‘Muneer Dheera’, threatened to pour acid in her face if she ‘barks against Islam’.

For those who can’t read Malayalam, the above comment translates to, “let her live the way she wants. If her parents don’t care, why should we? But if she barks against Islam, acid should be poured on her face. Let’s see if such women would still have people to roam around with when their faces are deformed.” (source)

I don’t know her, but I found her Facebook page, and judging by her photos and some of the contents of her postings, I would guess she is very liberal. After all, she is wearing a Hindu “bindi,” or a dot on the forehead which the Hindu religious uses to indicate spiritual “enlightenment” and really is pagan. Likewise, the postings about “only love” are also strikingly similar to the types of people in America who are associated with “liberal” political causes, have the “COEXIST” bumper stickers on their car, and actually believe that Islam is a “religion of peace.”

If this woman was born in “the West,” I guess she would be a feminist, and maybe even one of the “SJW” types so common place today. If she were a Christian, she would probably be one of those who walk around with signs saying ‘I stand with Muslims and Islam.’ She could be from anywhere, but she would be found in one of the “liberal” enclaves in America, be it in San Francisco, Greenwich Village, Asheville, or Boston, but her opinion would be the same as the millions of young women who claim to have “original” ideas about “women’s rights” but are really just following the ideas of old repackaged and sold to them as something new.

Again, I do not know her personally, but having seen many things and having a general feel for the zeitgeist, she would seem to fit this model, just in a different place and culture.

So is she is somebody that I would probably have nothing to do with, and might even hate Christianity, why did I bother to discuss her story?

Something that makes Christianity unique is that Christians, while commanded to fight for the Faith, are commanded to balance force with intellect just as justice with mercy. As much as Christianity stands as a bulkwark against the spirit of the age and will disagree with those who opposed what God has revealed, it likewise is done without being violently disagreeable. This is something that is simply not found in Islam because it teaches that the ends justify the means, or so long as “the will of Allah” and Islam are propagated, there is no limit to how it is spread to others.

The difference here is one of measure. For the Faith, one is supposed to take measures against people who become heretics or spread bad ideas in a manner proportionate to the act and which first always offers mercy and not simply resort to the harshest and most violent approach possible. Islam, however, because it denies that man is made in the image and likeness of God, it allows Muslims to respond in ways that disproportionate and objectively immoral yet give them religious license to do so because the people they are attacking are not considered human.

This folds into Christian teaching about works and deeds. Christ commands that men act in such a way that through seeing the deeds of Christians, non-Christians would come to be saved by recognizing the hand of God in their actions. Islam is a religion of the devil, and many times, it takes for these Muslims to see what their own religion teaches and in particular, contrasted against what God teaches, in order for them to realize how wrong Islam is and how Christ really is The Way, The Truth, and The Life.

Make no mistake, the evils of society must be combatted, for if God became man so that man might become like God, then Christians must purge evil from themselves and from society as they are able to in accordance with their vocation. Part of the way which evil is purged is not just by what Christians do, but what they do not do and the order in which they do what they do, for the Faith emphasizes order, mercy before justice, and proportionality to the crime committed, unlike the bestial, ham-handed approach of Islam.