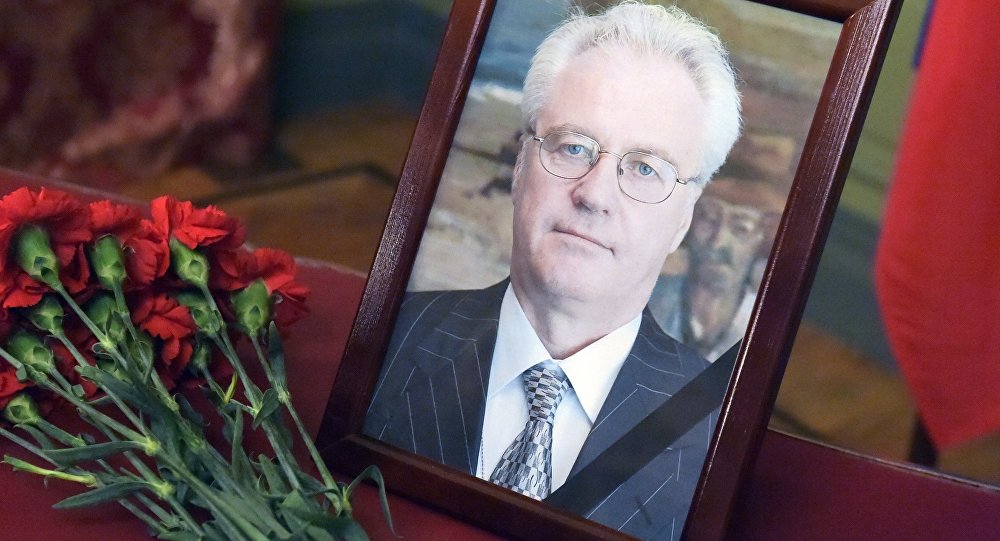 New York City officials, wishing not to be identified and only speaking under the condition of anonymity, revealed the Russian Ambassador to the United Nations (UN), Vitaly Churkin suffered from a heart attack when he collapsed in his office last month in New York. An autopsy was performed, presumably a result of his diplomatic status, yet the underlying cause of the heart attack is being withheld.

Exactly what caused the ambassador’s death is known, but according to the Associated Press (AP), those who are in the know, aren’t allowed to say. “An autopsy was performed on Churkin last month, but the death required further study. The additional tests had been completed, but Julie Bolcer, a spokeswoman for the city’s medical examiner, said the city’s Law Department told the office not to release any further information ‘to comply with international law and protocol,’” writes the AP.

As The Free Thought Project reported earlier, Churkin was highly critical of his U.S. and U.K. counterparts who preferred escalation of the Syrian conflict over measures which would produce a peaceful resolution to the Middle East’s latest international conflict, which may serve as the stage to World War III. Churkin’s obituary, first reported by The Guardian, indicated the ambassador, “hated the moralising tone of his US, British and French counterparts on the UN security council who, he felt, were not only hypocritical but were playing to the global gallery and aiming to score rhetorical points instead of looking for compromises that could lead to the resolution of differences. This applied particularly to the war in Syria, about which western governments tabled resolutions.”

Churkin was one of 7 Russian diplomats identified by The Free Thought Project who’d died mysteriously since the presidential election of 2016. And while his official cause of death is a heart attack, the factors leading up to it are still shrouded in mystery. Were there any substances in his system which would have caused his death? Was he taking heart medications? Who would have wanted he and the other six diplomats dead? These questions and more remain unanswered, even as NYC officials, who wish to remain in the dark, are reassuring the Russian official’s death was not a result of foul play.

UN officials are running interference in an apparent attempt explain away whey they’re unable to release the cause of death. James Donovan, minister counselor for host country affairs for the U.S. mission to the United Nations, told the AP in a statement, “The United States insists on the dignified handling of the remains of our diplomatic personnel who pass away abroad (including in Russia) and works to prevent unnecessary disclosures regarding the circumstances of their deaths.” Nonetheless, more questions remain.

The U.S. State Department is also involved in keeping the details of Churkin’s death a closely guarded state secret. The federal agency, “asked the city in writing on Feb. 24 not to reveal the autopsy results because Churkin’s diplomatic immunity survives his death,” writes the AP.

Later on March 1, the State Department sent another letter to the city revealing Russian officials were very concerned with the proceedings of the autopsy and subsequent discussions with the media about Churkin’s medical history, something they should not have done. Even Donovan penned a letter to NYC Mayor Bill de Blasio’s office of International Affairs, expressing concern over the city’s discussions of Churkin’s medical history.

For those seeking fodder for conspiracy theories, it must be noted that Churkin was a member of the UN Security Council. It consists of “China, France, Russian Federation, the United Kingdom, and the United States, and ten non-permanent members elected for two-year terms,” according to the UN website. Discussions at the security council are often heated and contentious. Just two weeks before his death, Churkin made international headlines when he quoted from the US Constitution after being lambasted by a recently appointed member to the council, former South Carolina Governor Nikki Haley.

Haley passionately called for Russia to return Crimea to the Ukraine and promised, “Until Russia and the separatists it supports respect Ukraine’s sovereignty and territorial integrity, this crisis will continue.” After the meeting adjourned, Churkin told reporters, “In this regard, one cannot forget the remarkable historical words that are found in the constitution of the United States: ‘We the people’…The people of Crimea quite clearly expressed their will in a referendum.” Not shrinking away from cries for Russia to leave the Ukraine and return Crimea to the sovereign country, Churkin told reporters the UK should first return the Malvinas islands which are claimed by Argentina, Gibraltar claimed by the Spanish, and the “annexed part of Cyprus which you turned into a huge military base.”