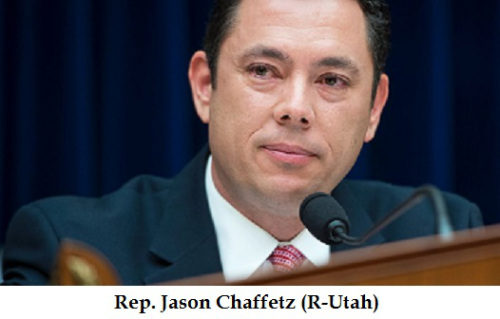 The term “deep state” refers to a state within a state– a political situation in a country when an agency or agencies of the government, such as intelligence agencies, the armed forces, or unelected career civil servants in the civilian bureaucracy, goes rogue and refuses to submit to, even subverting and rebelling against the civilian political leadership.

This post is about what a Deep State federal government agency did to a U.S. Congressman when he stepped on their toes.

First elected to the House of Representatives in 2008, Chaffetz came to prominence in 2015 for his extensive investigations into Hillary Clinton. He is an authentic conservative — a critic of Obamacare, homosexual marriage, and the Obama administration’s conduct in the 2012 Benghazi attack; and a skeptic on global warming and mandatory vaccinations.

As chairman of the House Committee on Oversight and Government Reform, Congressman Chaffetz earned the hatred of many in the Secret Service for his investigations into the agency’s many recent blunders and scandals.

In 2003, Chaffetz had applied to be an agent in the Secret Service but was not accepted, ostensibly because “better qualified applicants existed.” (New York Times)

Like anyone who applies for a federal job, the information of that individual disclosed in his/her application is protected by the Privacy Act from being misused or improperly accessed.

But the Secret Service precisely violated the Privacy Act by accessing, distributing, and leaking to the media Rep. Chaffetz’s personal data, according to an investigation conducted in 2015 by the Office of Inspector General of the Department of Homeland Security (DHS), the parent or supervisory agency of the Secret Service.

The report by the DHS Inspector General (IG) says:

We were unable to determine with certainty how many of those individuals in turn disclosed this information to others who did not have a need to know, who may have then told others. However, the disclosure was widespread, and recipients of the information likely numbered in the hundreds. Those agents we interviewed acknowledged freely sharing it with others in the Secret Service, often contemporaneously with accessing the information. One agent reported that by the end of the second day, he was sent on a protection assignment in New York City for the visit of the President of Afghanistan, and many of the approximately 70 agents at the protection briefing were talking about the issue.

Senior civil servants of the Secret Service, except one, did nothing to stop the propagation of Chaffetz’ personal data. The DHS Inspector General’s report says:

We identified 18 supervisors at the GS-15 or Senior Executive Service level who appeared to have known or should have known, prior to the publication of the fact, that Chairman Chaffetz’ MCI [Master Central Index] record was being accessed. Yet, with a single exception, we found no evidence that any of these senior Secret Service managers attempted to inform the Director or higher levels of the supervisory chain, or to stop or remediate the activity. Furthermore, we found no evidence that a manager at any level issued written guidance for employees to discontinue accessing MCI for anything but official use.

As recounted by Patrick G. Eddington for the Cato Institute, Chaffetz’s file was accessed at 29 different Secret Service facilities. None of the federal employees who did so had a legitimate reason to look at his file.

Even worse, the Secret Service’s Assistant Director for Training Ed Lowry actively encouraged the unlawful access and distribution of Chaffetz’s file. In an email to a colleague, Lowry wrote:

“Some information he [Chaffetz] might find embarrassing needs to get out. Just to be fair.”

While the IG investigators could not link Lowry to the leak of the Chaffetz file to the media, someone within the Secret Service clearly did so.

The leak of Chairman Chaffetz’ employment application was a clear attempt to intimidate or punish him for doing his job: overseeing the conduct of a federal agency under his committee’s jurisdiction. This incident comes just a year after revelations about the hacking by CIA employees of computers used by Senate Intelligence Committee staff investigating the CIA’s torture program. To date, there have been no prosecutions in either case or any attempts by Congress to use the impeachment mechanism to remove implicated federal officials. The lack of accountability in these episodes only invites further assaults on Congress’ status as an independent, co-equal branch of government.

On May 26, 2016, then DHS Director Jeh Johnson announced in a press release that after a review of the conduct of 57 Secret Service personnel, 41 were “disciplined”. One employee who was found by the DHS Inspector General to have disclosed Rep. Chaffetz’s private information to the Washington Post, resigned.