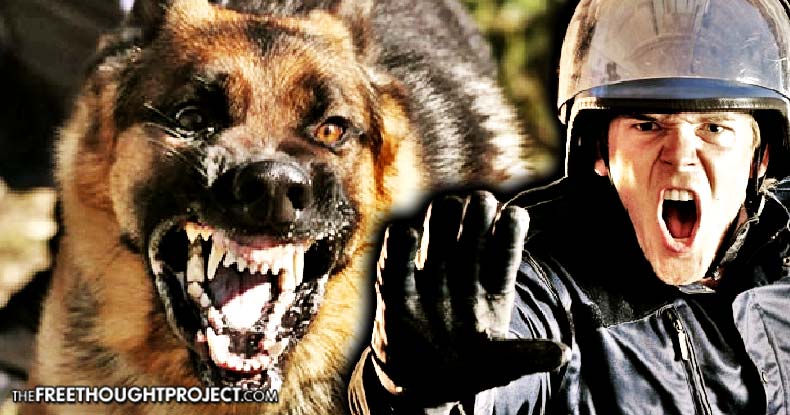 A disturbing and reckless precedent was just set by the U.S. Court of Appeals for the 4th Circuit, which held that the U.S. Constitution does not necessarily require cops to stop a K9 from tearing an innocent person to shreds. Seriously.

According to the ruling in the case of an innocent homeless man being mauled nearly to death by a K9, police officers who deliberately allow their K9 to maul innocent people will be immune from liability and victims will have zero recourse.

The grisly facts of the case are uncontested. One night in 2010, Officer Terence Garrison and his police dog, Bikkel, were tracking a robbery suspect in High Point, North Carolina. Bikkel led Garrison to an abandoned house, then attacked a man crouched behind a bush near the front stoop. Garrison quickly realized that the man did not match the physical description of the suspect. (In fact, he was Christopher Maney, a homeless man accused of no crime.) But Garrison decided that the man might still be dangerous, so he demanded that Maney show his hands before calling off Bikkel. But Maney was using his hands to try to protect himself against the dog and pleaded with Garrison to stop Bikkel’s attack, insisting that he had done nothing wrong. After allowing the mauling to continue for 10 seconds, Garrison finally told Bikkel to stop. He then put Maney in handcuffs and called medical support.

Because Garrison allowed his K9 to continue mauling Maney, the innocent homeless man suffered severe injuries. By the time he was brought to the hospital, Maney was in critical condition. Bikkel had torn apart the top of Maney’s head, removing an entire two-square-inch section of hair, skin, and tissue — which would later require a 16-inch skin graft. The dog also bit Maney’s arms and legs so severely that it led to a brachial artery blood clot with massive blood loss, bruising, and swelling.

After making a long and painful recovery, Maney attempted to hold the officer accountable for his sadistic and torturous act. He then sued Garrison for violating his Fourth Amendment right to be free from unreasonable seizures.

As it stands, a dog bite qualifies as a seizure under the Fourth Amendment. So, Maney argued that the time Garrison allowed the K9 to rip him apart was unreasonable.

However, the U.S. Court of Appeals for the 4th Circuit did not agree. Insanely enough, the court concluded that Garrison was shielded from liability because he did not violate a “clearly established” constitutional right.

According to the majority, as Slate reports, Fourth Amendment precedents do not unambiguously prohibit officers from “prolong[ing] a dog bite seizure until a subject complies with orders to surrender.” The majority analogized the mauling to a “Terry stop,” during which an officer may briefly stop and frisk individuals on the basis of “reasonable suspicion.” Garrison, the majority concluded, had really just engaged in a type of Terry stop in which “the classic Terry tableau is replaced by something more dynamic.”

Simply put, the court ruled that Garrison’s use of his K9 to maul a man nearly to death, was reasonable because it is no different than a stop and frisk.

Judge Pamela Harris, the only judge with enough humanity left in her to dissent, explained why this ruling is nonsensical and disturbing.

Maney was not himself suspected of any crime, armed or not, and he did not attempt to flee or to resist. Nevertheless, Officer Garrison deliberately subjected him to a canine attack in order to rule out any possibility that he might pose a threat. Whether or not a more customary Terry stop might have been authorized, I think it is clear enough that the circumstances did not justify the sustained mauling of Maney. Clear enough, that is, to warrant denial of qualified immunity to Garrison on Maney’s excessive force claim.

Harris noted that justifying the mauling by comparing it to a Terry stop was particularly ludicrous because “there was not reasonable suspicion sufficient to support a Terry stop” in the first place.

He (Garrison) was aware that there was a perfectly innocent explanation for Maney’s presence near the abandoned house. And I would not count against Maney his failure to stand and identify himself, which Maney—quite reasonably, in hindsight—attributes to his fear that a sudden movement might prompt a dog attack. Citizens are under no free-standing obligation to identify themselves to the police.

While Harris disagreed, the rest of the court believed Garrison “intentionally prolong(ing) a violent assault on Maney to determine whether he might pose a threat,” is entirely just.

It is likely that Maney will appeal this ruling. However, the mere fact that a court would rule in such a manner illustrates a much larger problem in America. Because Americans support a system that continuously refuses to hold police accountable while simultaneously granting them special privileges, cops can quite literally get away with murder.