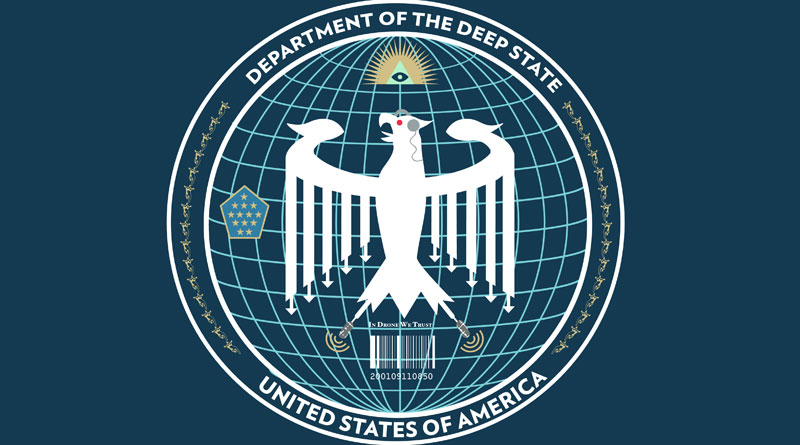 Many both within and beyond America’s borders labor under the delusion that US policy is determined by the nation’s elected representatives amid a careful balancing act between the judicial, legislative, and executive branches of government. In reality, the inner workings of US policy resemble nothing of the sort.

In reality, an unelected deep state controls the United States, its resources, government, and people. However, the term “deep state” has been overused and intentionally abused, particularly since the election of US President Donald Trump in an effort to continue concealing the real deep state and divert public attention away from what is becoming an increasingly obvious continuity of agenda from one presidency to the next.

Despite the myth of “democracy,” real power is held by those who control the essentials of any given state, province, district, or community. Essentials include control over monetary instruments, essential infrastructure such as water, power, communication, and transportation, control over manufacturing, healthcare, and basic public services, as well as more obvious forms of power such as control over police and military forces.

In rare instances, such vital essentials are controlled by decentralized, grassroots organizations – and in these instances deep states are either weak or virtually nonexistent. However, more often than not, this is not the case – at least not yet.

The concept of a “deep state” is not unique to only the US. Virtually every nation and throughout all of human history, regardless of a nation’s alleged political proclivities, has been ruled by wealthy and influential special interests either directly or by proxy.Ordinarily, regardless of apparent, ongoing political processes, those who actually, truly control these essentials often exist well beyond but not out of reach of politics. They include large corporations and financial institutions. Organizations, lobbyists, media platforms, think tanks, and political parties are set up and controlled by these special interests to then project their power and influence into or entirely driving any given political process.

Ignoring political rhetoric and charades, and focusing on where money, power, and influence truly resides, reveals the real deep state.

A cursory examination of President Trump’s administration reveals that he is but one of many extensions of the real deep state. Allegedly “alternative” Breitbart News mogul Stephen Bannon who functions as President Trump’s chief strategist is in fact a former Goldman Sachs banker. US Secretary of the Treasury, Steven Mnuchin, is also a former Goldman Sachs banker. Additionally, he managed funds for alleged “Trump archenemy,” George Soros, and had invested in the presidential campaigns of both Hillary Clinton and Barack Obama.

US Secretary of State, Rex Tillerson, is a long-time ExxonMobil executive, and the list goes on. 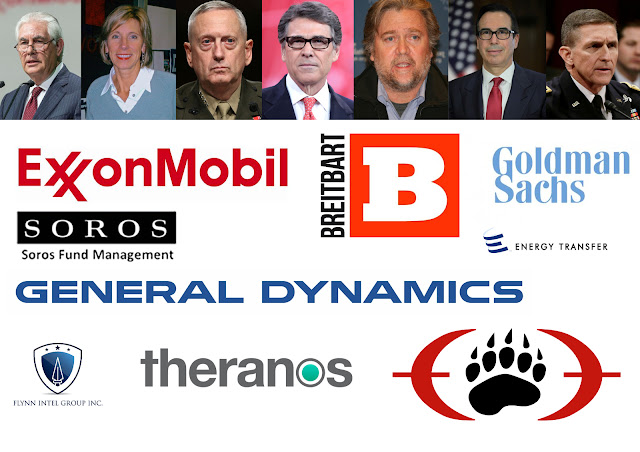 If one were to map the flow of US power and influence globally, tracing it back to its source, they would find themselves on Wall Street and in the boardrooms of financial institutions and corporations like Goldman Sachs and ExxonMobil. They would also find, leading out from these boardrooms, proxy news platforms like Breitbart News aimed at manipulating, distracting, and preying on the emotions of the American public.

In other words, in reality, the Trump administration, like those of previous presidencies, is the embodiment of the deep state.

However, a narrative has emerged alleging that President Trump is actually at war with a shadowy “deep state” consisting of everything from the US intelligence community to career bureaucrats “resisting” the Trump administration and “its” policies from within the system.

To explain this contrived narrative to the American public, another one of the real deep state’s propaganda functionaries, TIME Magazine, punished an article titled, “President Trump’s Allies Keep Talking About the ‘Deep State.’ What’s That?”

In it, it claims:

To allies of Trump in the conservative media and on Capitol Hill, it is an organized resistance within the government, working to subvert his presidency. They blame career bureaucrats, many of whom they see as loyal to former President Barack Obama, for leaking damaging information to the news media.

TIME also cites Freedom House, a US government-funded organization dedicated to regime change worldwide and chaired by the very same special interested centered upon Wall Street – again, the actual, real deep state – in an effort to downplay and dismiss the notion that the United States is actually run by just such an entity.

“[The White House] is taking a sexy term that means something very real in an environment in which there has been a lot of violence associated with this term and we’re applying it to stuff that’s pretty normal in terms of a large bureaucracy,” said Schenkaan, the Freedom House project director. “These are state employees and they have been implementing their jobs faithfully for a long time.”

Back in reality, the American public is beginning to suspect in much larger numbers than ever before, that the US government is simply carrying out a singular agenda – regardless of election results and political affiliations – of a permanent, deeply rooted conglomeration of special interests that transcend political parties, ideologies, presidential terms, as well as both domestic and international law. 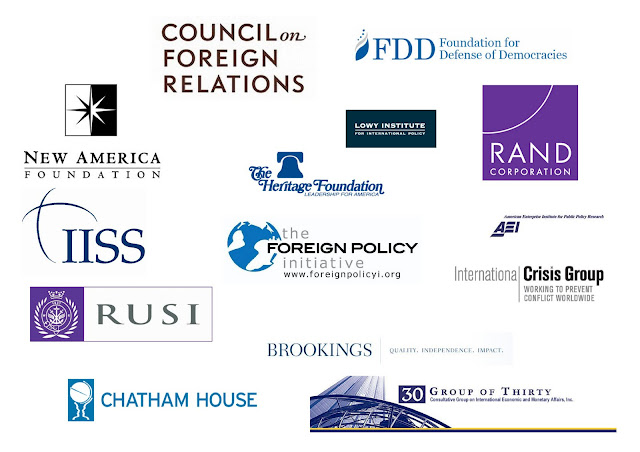 The creation of an attractive, provocative, almost irresistible strategy of tension between various functionaries within the real deep state is intentionally designed to draw in and trap political discourse long before it reaches and reveals the true nature of both the real deep state and the solutions required to dismantle it.

It is beyond obvious that America’s real deep state represents not only the usurpation of American sovereignty, but also a threat to global peace and stability. The wielding of America’s unwarranted power and influence manifests itself as regional wars, subsequent waves of refugees, socioeconomic exploitation and catastrophe within targeted states and across entire regions, as well as a general global malaise resulting from a minute handful of special interests abusing and egregiously wasting the planet’s human and natural resources for its own petty, self-serving pursuits.

It is not, then, an American problem, because the consequences of America’s unchecked deep state stretch out across the entire globe.

Confronting this deep state, and all others like it regardless of size and reach, requires a careful transition pursued by lesser states – and more importantly – by modern, decentralized institutions and alternatives driven by individuals.

Confronting the real deep state at the very source of its power – its corporate and financial activities and the profits reaped from billions of people across the planet paying into them – is fundamental.

The effectiveness of doing so is already evident in such realms as information space where decentralized networks of genuine alternative news platforms have countered and overcome the real deep state’s information war capabilities. Adding leverage to this process are competing centers of global power in Eurasia who have created competing media platforms that have further diluted the US deep state’s grip on information.

A similar process – enabled by technology – is unfolding across all aspects of manufacturing and infrastructure. The emergence of aerospace industries across the developing world is beginning to challenge the US-European monopoly over both air and space. Chinese corporations building trains and aircraft – on the largest end of the spectrum – are diluting monopolies enjoyed for decades by corporations like Boeing and Airbus. 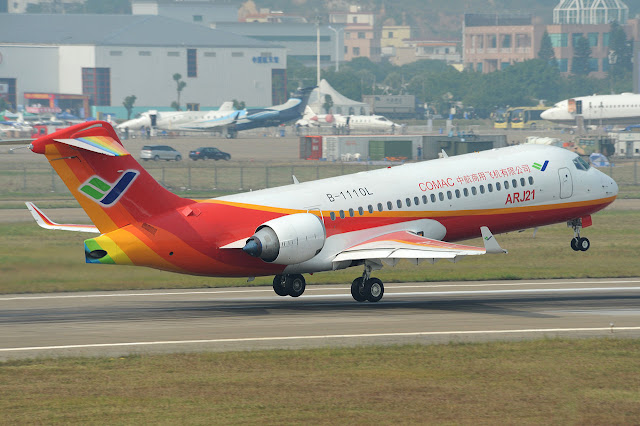 On the smaller end of the spectrum, localized manufacturing of simpler goods carried out by individuals or small businesses, both within formal and informal economies and markets, are chipping away at centralized manufacturing and retail monopolies.

Alternative energy such as solar power lends itself well to decentralized power production both for individuals and members of networks known as microgrids. As these microgrids proliferate, energy monopolies will inevitably whither.

And the organic food movement – a mesh network that continues to expand by leaps and bound in both size and capabilities – has challenged and in some instances, entirely replaced centralized agricultural and processing monopolies who also constitute the membership of the US deep state.

Despite this, the deep state still poses a formidable and dangerous threat to both global and individual peace and prosperity.

The natural human inclination to create alternatives to compete with such a threat – but which simply resemble a mirrored version of the threat – means that a “Chinese” or “Russian” dominated deep state leading any given unipolar global order will simply replace America’s immense deep state and continue carrying on the abuses and destructive role Wall Street and Washington currently fulfill.

Talk of a multipolar world order in which nations balance themselves against one another rather than fall under a single, unipolar order dominated by a single deep state and the handful of interests that constitute it, forms a bridge between today’s current global order and a decentralized, balanced future.

A multipolar world order in which nations are balanced globally, then leads to an internal process of decentralization and balance, all of which is driven by technology and the opportunities in business and sociopolitical pursuits opened up by it which allow each individual to take a more proportional share of a nation’s or community’s resources.

While it may seem counterintiutive for nations like Russia, India, or China, or even smaller players like Iran, Thailand, or Brazil to invest in decentralization, national and local self-sufficiency, and even informal economies, currencies, and markets, by doing so, they help chip away at the current, dominate global deep state which through its media and consumerism still reaches into, threatens, and influences virtually every society on Earth.

Ultimately, sidestepping the crass, unsophisticated but highly provocative and alluring strategy of tension created around the Trump administration and the alleged “deep state” it is supposedly fighting, is essential in identifying and confronting the real deep state that is orchestrating both sides of this charade.

Placing stock in political functionaries of the deep state to solve the deep state problem is beyond futile – it is a ruse intentionally engineered to preserve and perpetuate the deep state. By identifying the true source of the real deep state’s power and influence – the wealth it derives from its corporate-financier monopolies, its control over national and international infrastructure, and its media – we can begin devising practical alternatives to dilute these monopolies and thus the power and influence they grant those who control them.