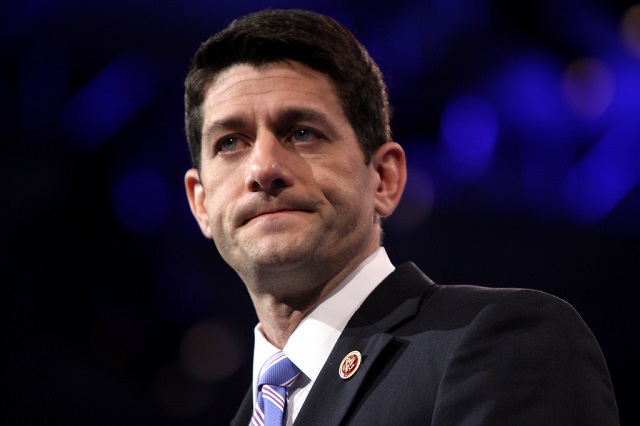 If you didn’t already hate Paul Ryan with a passion, this newly leaked audio from when Ryan abandoned Trump during the 2016 election will make sure you do.

While the tape exposes this traitor for the despicable coward he is, Breitbart paired this tape with reports they’ve received that Trump’s team signaled privately Ryan’s garbage healthcare bill “might be completely pulled and a more transparent and inclusive process could start as early as next week.”

On a never-before-released private October conference call with House Republican members, House Speaker Paul Ryan told his members in the U.S. House of Representatives he was abandoning then-GOP presidential nominee Donald Trump forever and would never defend him ever again. In the Oct. 10, 2016 call, from right after the Access Hollywood tape of Trump was leaked in the weeks leading up to the election, Ryan does not specify that he will never defend Trump on just the Access Hollywood tape–he says clearly he is done with Trump altogether.

“I am not going to defend Donald Trump–not now, not in the future,” Ryan says in the audio, obtained by Breitbart News and published here for the first time ever.

…”His comments are not anywhere in keeping with our party’s principles and values,” Ryan said. “There are basically two things that I want to make really clear, as for myself as your Speaker. I am not going to defend Donald Trump–not now, not in the future. As you probably heard, I disinvited him from my first congressional district GOP event this weekend–a thing I do every year. And I’m not going to be campaigning with him over the next 30 days.”

“Look, you guys know I have real concerns with our nominee,” Ryan continued. “I hope you appreciate that I’m doing what I think is best for you, the members, not what’s best for me. So, I want to do what’s best for our members, and I think this is the right thing to do. I’m going to focus my time on campaigning for House Republicans. I talked to a bunch of you over the last 72 hours and here is basically my takeaway. To everyone on this call, this is going to be a turbulent month. Many of you on this call are facing tough reelections. Some of you are not. But with respect to Donald Trump, I would encourage you to do what you think is best and do what you feel you need to do. Personally, you need to decide what’s best for you. And you all know what’s best for you where you are.”

This despicable coward said his comments were “indefensible,” LOL!

“I’m just going to let the Republic die because women let billionaire playboys grab them by the pussy.”

His comments were totally defensible and as we learned from the outcome of the election, no one actually cared.

This filthy coward abandoned us on the battlefield because some fake polls from proven liars told him the election was over.

How he can even look the American people in the face after this despicable act?

I can’t believe people voted for this piece of garbage over the great Paul Nehlen.

…It’s worth noting that the person Ryan leaned on for political advice in abandoning Trump during this conference call was now House Energy and Commerce Committee chairman Rep. Greg Walden (R-OR). Walden, at the time, was chairman of the National Republican Congressional Committee (NRCC). This audio file obtained by Breitbart News does not include Walden’s comments, so it’s unclear exactly what he said. But Walden is now one of Ryan’s top lieutenants in the House of Representatives, leading the promotion of this healthcare legislation–and one of the two committee chairmen who kept his committee in session overnight to speed up the mark-up of the legislation last week.

Ryan’s decision to abandon Trump on the campaign trail has become a focal point in healthcare negotiations. While meeting with conservative leaders last week at the White House, this exact topic came up–as Tea Party Patriots’ Jenny Beth Martin and Trump shared an exchange that was particularly awkward for White House chief of staff and Ryan ally Reince Priebus.

“Inside the Oval Office last week, there was a telling exchange between conservative activist Jenny Beth Martin and the president,” Jonathan Swan of Axios reported on Sunday night, adding:

During Trump’s Wednesday meeting with conservative leaders over the healthcare plan, Tea Party Patriots leader Martin subtly reminded Trump that her super-PAC stood by him ‘through thick and thin’ during the campaign, unlike a certain politician from Wisconsin. According to two sources in the room, Martin didn’t mention Paul Ryan’s name. But everyone knew who she was talking about. She reminded Trump that in October — when the crude ‘Access Hollywood’ tape leaked and Ryan disinvited Trump from a Wisconsin event — Tea Party Patriots Citizens Fund volunteers were working the phones on Trump’s behalf. Trump smiled and glanced over at his chief of staff Reince Priebus. Trump said that, yes, he had been disinvited. And he thanked Martin for standing by him.

Ryan has been unwilling to negotiate on the specifics of his bill, which has earned multiple negative monikers like “Obamacare 2.0,” “Obamacare Lite,” “RyanCare,” and “RINO-CARE” from detractors. But President Trump and his true allies, despite what Ryan’s allies inside the White House say publicly, have been much more willing to negotiate, according to House and Senate conservatives who have had direct conversations with the president.

“We have gotten a signal from the White House that the bill might be completely pulled and a more transparent and inclusive process could start as early as next week,” one senior Republican Senate aide told Breitbart News on Friday. “House leadership misled the White House on how popular this bill would be with conservatives.”

“That would be excellent news, and the best way to ensure we actually deliver on what we told the voters we would do,” another senior congressional aide told Breitbart News when asked about the possibility Ryan’s bill might be pulled altogether and a new renegotiated bill introduced afterwards. “The bill as is cannot pass and there is a growing chorus of Republican members in both houses growing impatient with the current unwillingness to make any changes to the current House bill.”

Good, they need to move quick.

I’ve hesitated to comment on this whole debacle because Trump actually ran on keeping the two worst parts of the bill, both of which are the most popular, i.e. keeping young people covered on their parents’ plan until age 26 and forcing insurers to cover pre-existing conditions.

That said, I’m sure Ryan’s bill was garbage as he’s a garbage human being and I’m sure they can come up with something less stupid if they’re actually willing to upset the lobbyists who have Ryan in their pocket.