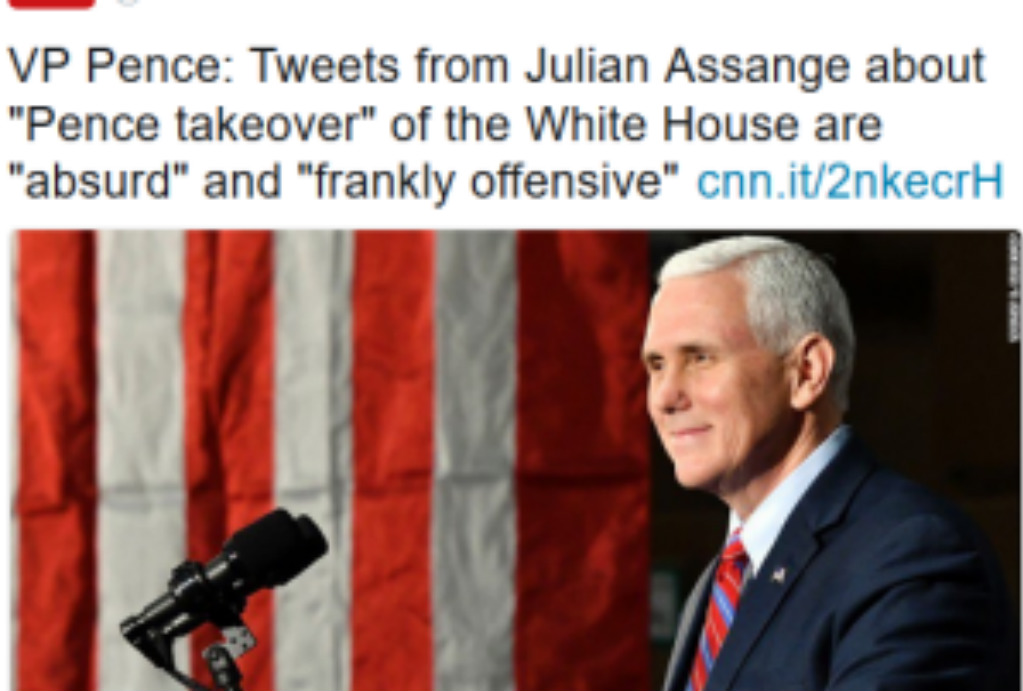 One, that Hillary Clinton is “quietly pushing” for VP Mike Pence to take over the Trump administration because, unlike President Trump, “Pence is predictable” and therefore “defeatable”.

Two, that two officials in the U.S. intelligence community (IC) who are close to Pence said “they are planning on a Pence takeover”.

Here are screenshot of the two tweets:

The tweets are alarming, to say the least.

A Pence takeover would mean one of four scenarios:

About 6 hours after Assange’s first tweet, in a tweet, CNN quotes VP Pence that Assange’s assertion about a “Pence takeover” of the White House is “absurd” and “frankly offensive”:

By this time, Assange probably realized that people may have interpreted his first tweet as implying a Trump assassination. So he sent out another tweet that Hillary Clinton and the two intelligence officials had meant impeachment:

Notwithstanding Assange’s reassurance, there have been so many death threats (see below) made against President Trump, the matter certainly is not out of the realm of possibility or probability. See:

I have seen rumors of assassination, but have refrained posting those rumors because of what they are — rumors. But of late, my “spider sense” is astir: there is something ominous in the air . . . .

It doesn’t help that today, March 15, is the infamous Ides of March when Julius Caesar was assassinated. The Left are calling on their demonic hordes to mail attack postcards to President Trump; our side has a counter Operation Postcard campaign, wherein we are sending President Trump postcards of thanks and support. Click here for President Trump’s address and a template for your postcard.

Today, March 15, is also when America’s debt ceiling, once again, is reached.

Debt ceiling refers to a legislative limit on the amount of national debt that can be issued by the US Treasury, thus limiting how much money the federal government may borrow. Tomorrow, when the debt ceiling is reached but Congress does not increase the debt limit, Treasury will need to resort to “extraordinary measures” to temporarily finance government expenditures and obligations until a resolution can be reached. If a legislative impasse continues, the Treasury will default — which has never happened. A protracted default could trigger a variety of economic problems including a financial crisis, and a decline in output that would put the country into an economic recession.

And don’t forget to mail your postcard of support today!