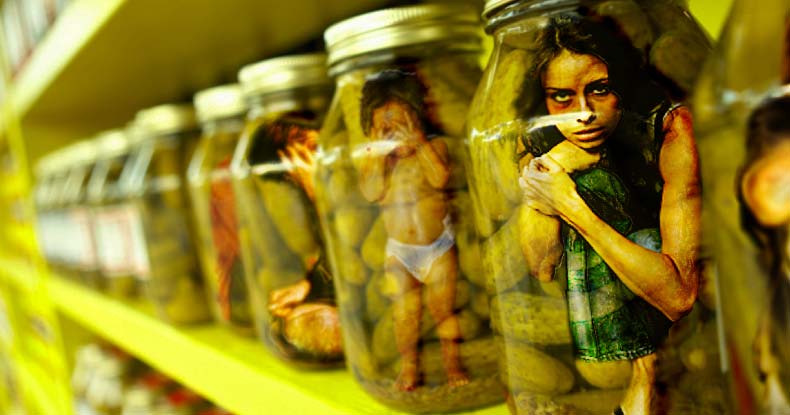 In late 2016, the government’s spin machine made it a point to feature “pizza gate,” only to mock anyone who would ever believe it to be true. The thought that high-level government officials in the U.S. would or could ever be involved in sex-trafficking or pedophilia was presented as far-fetched conspiracy theory, only believed by the fringe elements of society. But as The Free Thought Project has reported on numerous occasions, pedophilia involving high-level government officials is becoming the norm rather than the exception.

In the North Bengal region of India, a child welfare officer, India’s equivalent of a Child Protective Services official was arrested for her role in a child-trafficking ring. Sasmita Ghosh’s arrest makes the seventh as of late. The State’s Criminal Investigative Department (CID) made the arrests. According to the Hindu, “The CID had unearthed the child trafficking racket during raids at homes and nursing homes in Baduria area of North 24 Parganas district, in Behala in the southern fringes of Kolkata and some other parts of south Bengal in November last year.”

Abortion clinics in the area were convincing mothers to give birth to their children in exchange for money ranging between $1,400 and $4,500 USD. Other birthing centers told mothers their children were stillborn, when they weren’t, allowing the clinic to steal the babies for sale on the black market. The children were transported in bread baskets to nursing homes in the area where they would remain until they were sold into servitude, as sex slaves, or brothels.

“It is a huge network of NGOs, nursing homes, doctors and middlemen dealing in illegal adoption and baby trafficking that the police have busted. Our men are now building on the huge leads they have already got in this case,” Rajesh Kumar, CID’s Additional Director General told the press. Additionally, investigators believe foreigners were buying the children. Currency from other countries was found at the same time the children were discovered. Several corpses and skeletons of infants were also unearthed in the raided businesses.

Child trafficking is on the rise in the U.S. In 2006, a woman living in North Carolina, Mercedes Farquharson, fled the country when it was discovered she’d been using two young girls as house slaves, forced to farm the land, and do all the household chores, along with cooking and cleaning. In 2009, she was arrested in Bulgaria, where she’d fled to escape justice.

The trafficking of children isn’t limited to lowly child-protective service workers either. Hama Amadou, an opposition leader in the Sahel state of Niger was sentenced to one year in prison for providing babies to Niger’s elite society. “Prosecutors claim that Amadou was one of a group of people accused of smuggling babies from Nigeria via Benin to wealthy couples in Niger by falsely claiming the parenthood of around 30 children,” according to Deutsche Welle (DW), Germany’s international newsgroup. Childlessness is Niger is looked down upon, so one way the elitists solved their own infertility problem was to take someone else’s child as their own.

DW described what happened after they acquired a child, “At the turn of the last decade, Niger’s elite went through a baby boom. Women who had been childless for years were suddenly celebrating the birth of their first child.” The miraculous blessings of motherhood reportedly came at the expense of someone else’s presumably stolen, purchased, or seized baby. Amadou was tried in asentia and his lawyer says the allegations are politically motivated.

Closer to home, Child Protective Services, as TFTP has consistently reported, is authorized to kidnap children at will, and place those children in foster care homes. The government’s own agency charged with protecting children, routinely displaces babies, children, and adolescents away from their parents in order to supposedly protect those children.

Many of those same CPS workers are abusers as well, who sometimes place those kidnapped children in the homes of sexual predators, where they are routinely victimized. The terrorist organization evokes fear in the hearts of so many parents. The power CPS possesses is legally unmatched in all of society. If you’d like to peruse our archives of CPS articles, you can do so by clicking here. Children are being ripped from their parents for something as innocent and well-intentioned as homeschooling.

If child trafficking arrests of government officials can happen around the world, why is it so far-fetched to think it cannot and does not happen here in the U.S.? The reality of the situation is that it is not at all far-fetched and even admitted. But the American spin machine is able to make anyone who talks about it look like a crazy person. The problem is getting so large, however, these sickos are having a hard time keeping it under wraps. As the Free Thought Project previously reported, former Congresswoman Cynthia McKinney says if the government actually investigated it, child trafficking would destroy both Democrats and Republicans.