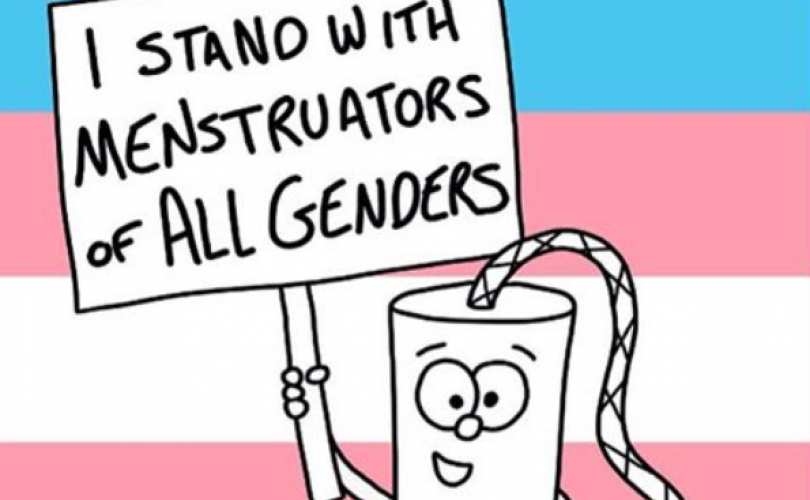 Psychosis is a form of insanity, the medical definition of which is:

A thought disorder in which reality testing is grossly impaired. Symptoms can include seeing, hearing, smelling, or tasting things that are not there; paranoia; and delusional thoughts.

“Reality testing” refers to “the ability to distinguish internal distortion and fantasy from accurate representation of external events.” Both “grossly impaired reality testing” and “delusional thoughts” refer to the insane individual’s failure to accurately perceive the world as what it is, but instead has a distorted view of reality.

A self-described “genderqueer” woman named Cass Clemmer is the author of The Adventures of Toni the Tampon: A Period Coloring Book — a coloring book for kids which claims men also menstruate. By the medical definition for psychosis, the book’s author is insane.

Published last December by Bloody Queer Publishing and dedicated to “menstrual warriors,” the book is marketed as fun and educational for children, but is nothing other than unscientific propaganda that seeks to poison young minds with utter nonsense.

The book is praised by Planned Parenthood as “the period-themed coloring book we deserve” because the book “smashes” the gender taboo about menstruation.

The book’s blurb on Amazon.com says:

Color in 20 hand drawn pages of Toni’s adventures with friends. Great for all ages, this coloring book is an easy way to start a conversation with young kids about menstruation, and a perfect excuse for adults to have some bloody good fun.

Here’s the description of the book’s author, Cass Clemmer, on Amazon:

Cass is an artist and menstrual health educator who harnesses the power of creativity and humor to shift the conversation around menstruation. Cass grew up as a missionary kid in the Democratic Republic of Congo, where a deeply conservative community taught everyone to be ashamed of their periods. Today, Cass is fighting back by sketching tampons, pads, cups, and sponges as a way to educate menstruators of all ages and genders about the magic that is menstruation.

As reported by Christian Post, 2015 American University graduate Cass Clemmer said the coloring book grew out of her project for a gender studies college class:

“I developed a whole character from Toni after I saw some googly-eyes my mom had bought for me and decided to put them on a tampon. From there, the two collided into my period coloring book. Toni is a little genderqueer tampon — kind of like me in tampon form — who just goes by Toni instead of any pronouns.”

In addition to Toni the Tampon, the coloring book features other menstrual characters such as Marina the Menstrual Cup, Sebastian the Sponge and Patrice the Pad. Clemmer explains:

“The rest of the period pals include Patrice and Marina, both of which I use ‘she/her/hers’ pronouns for, and Sebastian who goes by ‘he/him/his’. I know that giving pronouns to menstrual hygiene products isn’t the perfect way to disrupt the notion that periods are for cis-women only, but it’s definitely a start in pushing us to stop using shredded blood and tissue to define someone’s gender for them.”

She told Mashable that she deliberately made Toni the Tampon a gender-ambiguous character as a form of representation for genderqueer people:

“I’d rather help just one genderqueer or trans menstruator feel like they were seen, than sell a thousand copies only to reinforce the boundaries society draws by gendering periods in the first place.”

On Amazon, 66% of reviewers gave The Adventures of Toni the Tampon a one-star rating. Here’s a sample:

“Menstruators of all genders” is not scientific at all. Thus it is not a good tool for educating kids.

As any High School Biology teacher can explain–at a level even someone like Cass Clemmer could understand–only females menstruate, and Male and Female are defined by chromosomes, not by delusional neuroses.

[A]s a mother, my 2.5yo daughter is already aware of where babies come from and all about menstruation and both were taught as a happy, positive fact of life. I don’t need some freaky gross coloring book to teach her that. Grow up and stop disgracing our society and women in general. Stuff like this belongs in the trash.

Other reviewers take Clemmer to task for saying men get periods for another reason:

Nothing educational or humorous about such notion. When blood comes out from the male organ, that is a health crisis, not a natural occurrence. Giving false information and idea about prostate cancer is absolutely despicable. No one wants to downplay or give false information about breast cancer. The author, publisher and Amazon should know better.