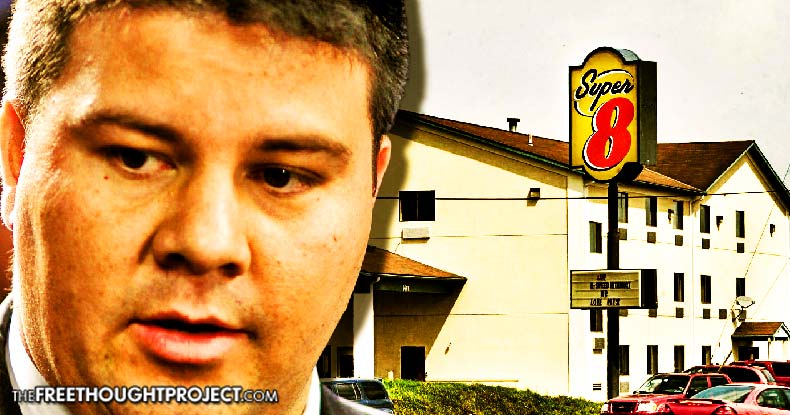 Moore, OK — An Oklahoma senator is in hot water this week because a teen boy’s parents called police after finding disturbing text messages between him and their son. When police began their investigation into the texts, they found Senator Ralph Shortey in a motel room with the boy.

According to Cleveland County District Attorney Greg Mashburn, authorities are saying the boy is around 16- or 17-years-old. Shortey, who is 35, is now under investigation by Moore Police Department for being caught in a Super 8 Motel with the boy last week.

According to police, after the boy’s parents reported the text messages to them, they began their investigation.

“On March 9 … officers of the Moore Police Department were contacted in reference to a welfare check at a local hotel,” Lt. Kyle Dudley told NewsOK.com. “Responding officers found a juvenile male in a hotel room which was also occupied by an adult male. The circumstances surrounding this incident are currently under investigation and no additional information can be released at this time.”

A worker at the Super 8 confirmed to NewsChannel 4 that “a” Ralph Shortey checked in on March 8th according to their records. Only 30 minutes later, police arrived.

Shortey is married with two children.

Shortey, who has been a senator since 2010, is no stranger to media coverage, as his controversial bills have garnered him quite a bit of attention over the years. Shortey was also the state chair of President Donald Trump’s campaign during the primary elections.

“I am proud and honored to have been tapped as Chairman of the campaign for Oklahoma,” Shortey wrote on his Facebook Sept. 2015, according to The Lost Ogle. “We are very excited for the opportunity to have Mr. Trump here,” he said, announcing a rally for Trump at the Oklahoma State Fair.

It is important to note that charges have yet to be filed, no suspects have been named in a particular case, and Shortey is presumed innocent until proven guilty. It is also important to note that the legal age of consent in Oklahoma is 16. That being said, the facts of the case so far have led to statements from both Oklahoma Democrats and Republicans.

“The legislature doesn’t need to be focusing on how to deal with or cover up an incident, another incident, like this right now. They need to be working on the business of the people,” Oklahoma Democratic Party Executive Director Sarah Baker said.

“While a final resolution should await completion of the police investigation, Sen Ralph Shortey owes it to his constituents and all taxpayers to suspend himself from all official activities. This is far too embarrassing to have him speak, vote or represent Oklahoma on any issue.”

“The Oklahoma Republican Party takes all accusations against elected officials seriously, especially when the welfare of a minor is involved. We have reached out to Senator Shortey for comment and have not heard back from him at this time. We await the report from law enforcement on whether charges will be filed,” said Pam Pollard, Chairman Oklahoma Republican Party.

When KOCO 5 News went by Shortey’s office, there was a note posted on the door saying Shortey would be out for the week.

Even though the jury is still out on this case, as the Free Thought Project previously reported, former Congresswoman Cynthia McKinney says if the government actually investigated it, high-level underage sex trafficking would destroy both Democrats and Republicans.