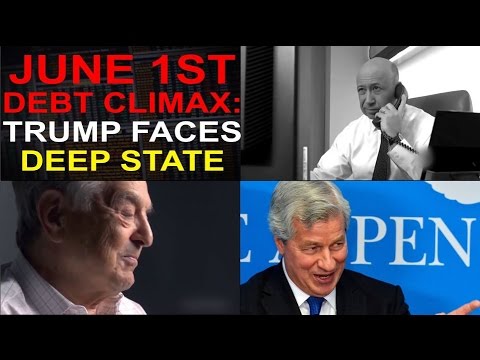 On Wednesday, March 15, 2017 the U.S. government once again hit its debt ceiling. In short, this means that until Congress raises the ceiling, the government will be unable to borrow more money. If you remember the last time this happened, there were weeks of posturing by Republicans and Democrats while some government services started shutting down. After much deliberation and negotiation the debt ceiling was eventually raised and collapse was avoided.

But this time around we may see a very different set of events play out. If it isn’t clear to you just yet, President Trump is under attack from all sides. Democrats, the media and even members of his own Party want to see him fail. But perhaps more importantly, it is the shadow operators known as “The Deep State” who may take this opportunity to lay the blame for decades of machinations at Trump’s feet.

These shadow forces have been at work manipulating everything from the global economy to the political affairs of sovereign nations.

While March 15th is the day we hit our debt ceiling, June 1st, 2017 is the real date to watch. That’s the day the Deep State may finally pull the trigger:

And what better way to do that then to collapse the economy?

Establishment Republicans and Democrats hate trump… many want to see him fail… even if it means a real systematic crisis for the nation.. in fact, many will even see this as a crisis to get rid of the President… to blame him for the last 30 years of mismanaging the country’s finances and be able to rebuke the voters who elected the President with a national mess… Trump and his supporters will be blamed and take the fall… this is the secret plan

The following report from Wealth Research Group explains how and why it will all go down:

By June 1st, 2017 the Treasury Department will have exhausted ways to get creative with paying its bills and without new debt it will be forced to default…

Most Americans aren’t aware at all that their entire way of life solely rests on the willingness of foreign governments to lend money to their government, otherwise the entire Washington cash burning machine will come tumbling down by the following morning… It all looks so safe with their respectable government buildings and their fancy suits, but in truth the entire economic machine is fragile like glass.

From March 15th to June 1st is the ultimate political grandstand event… and this time Republicans and Democrats both have secret agendas to allow a real crisis to happen… using it to overthrow a populist uprising and the President who doesn’t bow to the status quo.