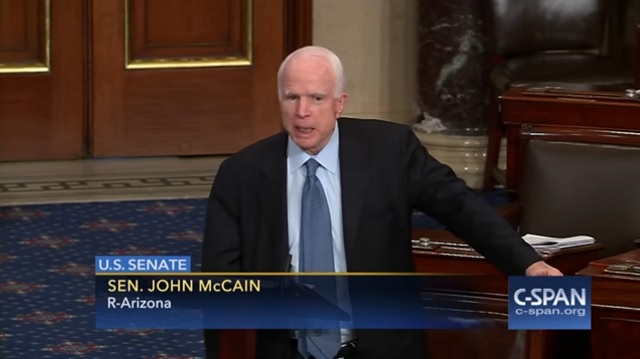 Senator John McCain lost it on the floor of the Senate Wednesday and accused Senator Rand Paul of “working for Vladimir Putin.”

Paul opposed giving NATO membership to Montenegro, saying it would be “unwise to expand the monetary and military obligations of the United States given the burden of our $20 trillion debt.”

McCain on the other hand insisted anyone who is against bringing the small country into NATO is a Putin agent.

Paul then proceeded to vote against the accession protocol and walk away.

“That is really remarkable, that a senator blocking a treaty that is supported by the overwhelming number – perhaps 98, at least, of his colleagues – would come to the floor, and object, and walk away,” McCain said.

“He has no justification for his objection to having a small nation be part of NATO that is under assault from the Russians. So I repeat again, the senator from Kentucky is now working for Vladimir Putin.”