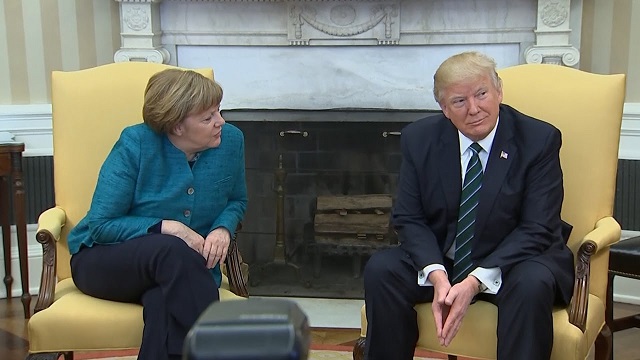 That Muslim-loving sow, German Chancellor Angela Merkel, was in D.C. today, and the MSM are beside themselves because President Trump appeared to refuse to shake her hand.

Photographers: Can we get a handshake?

Merkel (to Trump): Do you want to have a handshake?

Angela Merkel made clear her adoration of Barack Obama.

When Obama visited Germany in his final foreign trip last November, he called Merkel “probably . . . my closest international partner these past eight years.” Merkel thanked Obama for “a good, friendly and intensive partnership” and wailed, “It’s hard for me to say goodbye.”

As reported by WPVI-TV, in a letter to Trump the day after his historic win, Merkel started by congratulating, then gave Trump a PC “social justice” lecture:

“Germany’s ties with the United States of America are deeper than with any country outside of the European Union. Germany and America are bound by common values – democracy, freedom, as well as respect for the rule of law and the dignity of each and every person, regardless of their origin, skin color, creed, gender, sexual orientation, or political views. It is based on these values that I wish to offer close cooperation, both with me personally and between our countries’ governments.

Partnership with the United States is and will remain a keystone of German foreign policy, especially so that we can tackle the great challenges of our time: striving for economic and social well-being, working to develop far-sighted climate policy, pursuing the fight against terrorism, poverty, hunger, and disease, as well as protecting peace and freedom in the world.”

On January 29, 2017, via her spokesman Steffen Seibert, Merkel criticized President Trump’s executive order on a temporary ban on visas to nationals from countries known for terrorists — a ban that has the support of a majority of Europeans:

“The chancellor regrets the U.S. entry ban against refugees and citizens from several countries. She is convinced that even the necessary, decisive battle against terrorism does not justify putting people of a specific background or faith under general suspicion.”

Well, that’s because oh-so-smart Angela Merkel thinks Islam “isn’t a source of terror” and that Europe — and America — must take more refugees.

I wouldn’t shake her hand either, especially knowing that she’s probably shaken the hands of Muslims whose “religious” toiletry code tells them to wipe their butts, not with toilet paper, but with their hands — like that Muslim takeout chef, Mahbub Chowdhury, who was arrested after UK health inspectors found an empty milk bottle under the kitchen sink covered with Chowdhury’s brown fecal finger prints.

Meanwhile, things are going swimmingly well in Germany under Merkel, who imported 1 million Muslim “migrants” into a country of 82 million: