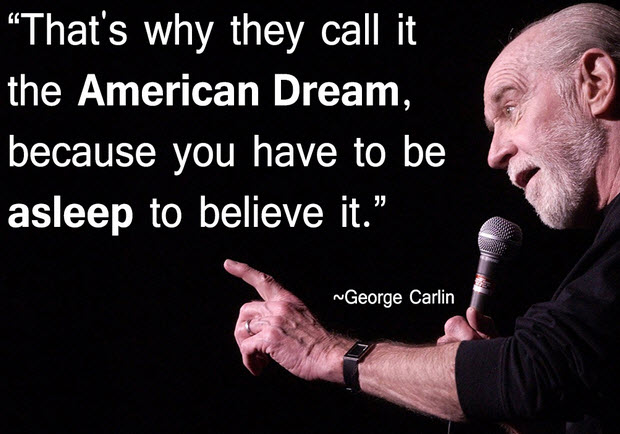 We all know what comedian George Carlin said about the American Dream: that you have to be asleep to believe it.

Well, now the Federal Reserve is agreeing with him.

In a new study published by the Federal Reserve Bank of St. Louis, they admit the so-called American Dream is now largely an impossible goal for a majority of the country.

In other words, the American Dream is officially dead.

Chetty concluded that American children have a whopping 7.5% chance on average of actually achieving the American Dream in America.

Sure, a chance is still a chance, but that’s a really low chance.

So Americans would basically have almost twice the chances of achieving the American Dream in Canada, making it the Canadian Dream.

But 7.5% is just the average, mind you. That factors in super wealthy neighborhoods. When you get down into the major cities where the majority of people live, 7.5% looks more like a cruel, unachievable joke.

“In the city of Baltimore, you unfortunately have only a 3.5 percent chance of making that leap from the bottom fifth to the top fifth. That compares with 4.7 percent in D.C.”

Of course, your chances are higher if you are a child graced with the luck of being born in a predominantly wealthy, suburban neighborhood, but come on everybody knew that already.