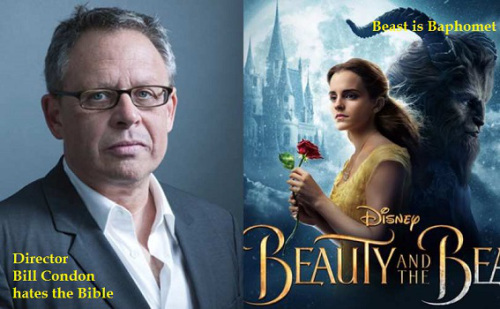 I have published two posts warning about Disney’s new flick, Beauty and the Beast, that:

Beauty and the Beast‘s director Bill Condon, 61, born in New York City and raised in an Irish Catholic family, is openly homosexual and has a visceral hatred for Christianity.

Pete Baklinski reports for LifeSiteNews, March 17, 2017, that in a 2007 interview with Passport Magazine, Bill Condon said he wishes he could “rip pages out of the Bible” when he stays in hotel rooms.

When asked what the first thing he does when he gets into a hotel room, Condon replied:

“I wish I could say I’m like [homosexual actor] Ian McKellen and immediately go rip pages out of the Bible, but there don’t seem to be bibles in the hotel rooms I stay in these days.”

According to a report by The Charlotte Observer’s Lawrence Toppman, there are two homosexual moments in the film:

Condon said in a March 1 interview with Attitude:

“Le Fou is somebody who on one day wants to be Gaston and on another day wants to kiss Gaston. He’s confused about what he wants. It’s somebody who’s just realising that he has these feelings. And [actor] Josh makes something really subtle and delicious out of it. And that’s what has its payoff at the end, which I don’t want to give away. But it is a nice, exclusively gay moment in a Disney movie.”

So committed and insistent is Disney on the homosexual message in Beauty and the Beast that the studio would rather swallow the loss of box office revenue in Malaysia than cut out the pro-“gay” scenes, as requested by the Malay government.

Beauty and the Beast is being boycotted by Christian and Conservative groups:

Alas, the boycotts evidently are in vain. The movie had a record $170 million opening in the U.S. this weekend, earning $350 million worldwide. (Hollywood Reporter)