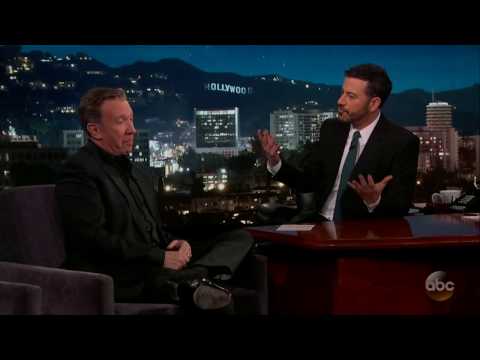 Allen, 63, best known for Home Improvement, currently plays an outspoken conservative on the sitcom Last Man Standing. He is also one of the few actors in Hollywood to profess having conservative leanings.

Here’s a transcript of what Allen said, beginning around the 4:01 mark:

Kimmel: “You went to the presidential inauguration?”

Allen: “I was invited by, uh, we did a VIP thing for the vets and went to the Veterans Ball. I went to go see the Democrats, Republicans. Yeah, I went to the inauguration. I mean you gotta be real careful around here. You get beat up if you don’t believe what everybody else believes. This is like ’30s Germany [makes quotations marks with his fingers] — ‘If you’re not part of the group, you know what we believe is right.’”

Allen then talked about how he wouldn’t take his children to see the Gay Pride Parade because of naked men on floats, and about surveillance America, where government and corporations spy on us via our cell phones, and Google Map takes pictures of our homes.

Unlike so many empty bubble-headed Hollyweirdos, Tim Allen is knowledgeable and politically savvy. One of the good guys!