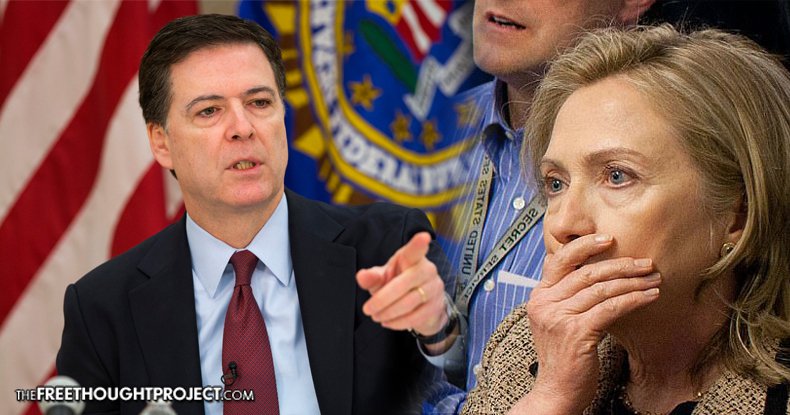 Supposed Russian connections are a smokescreen to censor alternative media

(INTELLIHUB) — In a stunning turn of events, the FBI is now apparently investigating multiple alternative news outlets for supposed Russian connections, according to deep state operatives who gave the information to McClatchy News in an obvious attempt to undermine the growing power of the anti-establishment media.

The report, completely sourced by globalist operatives, claims that federal investigators are examining (see making up out of thin air) whether “far-right” news sites played any role in the Russian cyber operation that some in the intelligence community claim widened the reach of news stories that favored Donald Trump.

According to the anonymous sources in the McClatchy report, operatives for Russia strategically timed computer commands or “bots” to flood social media with links to pro-Trump stories, including those that appeared on sites like Infowars and Breitbart.

“The bots’ end products were largely millions of Twitter and Facebook posts carrying links to stories on conservative internet sites such as Breitbart News and InfoWars, as well as on the Kremlin-backed RT News and Sputnik News, the sources said. Some of the stories were false or mixed fact and fiction, said the sources, who spoke on condition of anonymity because the bot attacks are part of an FBI-led investigation into a multifaceted Russian operation to influence last year’s elections,” reads the McClatchy disinformation piece.

When reading through the piece it becomes clear that these news outlets are not actually being targeted because of Russian connections (there literally is none) but because they were critical of failed presidential candidate Hillary Clinton throughout the election which is somehow being framed as the work of Russian operatives when in reality it was patriotic Americans who were fed up with the open corruption of the entire Clinton family.

The McClatchy report continued, “A top priority of investigators is to determine who delivered those hacked emails to WikiLeaks, a London-based transparency site that published them online, the sources said. News stories about the emails embarrassed Clinton at key points in the campaign. WikiLeaks founder Julian Assange has denied that the Russian government was the source of the email dump.”

“As for the bots, they carried links not only to news stories but also to Democratic emails posted on WikiLeaks, especially those hacked from Podesta and made public in October, said Philip Howard, a professor at the Oxford University Internet Institute who has researched the bot attacks.”

So there you have it. Legitimate independent news outlets are Russian agents because they wrote about the hacked emails published by Wikileaks. In the new red-scare America you literally cannot be critical of Hillary Clinton without being accused of being a Russian operative.

Amazingly, the McClatchy piece even quotes Clinton operative John Podesta and disgraced Democratic operative Donna Brazile as if that somehow gives the article more credibility when in reality it shows who this attack is meant to help by literally quoting the people who were exposed by the Wikileaks release in the first place.

Keep in mind that thanks to the more recent Vault 7 Wikileaks release we already know that the intelligence community has the ability to carry out hack attacks and pin the blame on foreign nations, including the Russian Federation.

As I wrote at the time of their release, “Among the startling revelations coming out through the Wikileaks “Vault 7” release is the shocking fact that the CIA has the ability to “misdirect attribution” of a hack, effectively making it look as if a country such as Russian was the culprit when in reality it was forces within the Central Intelligence Agency itself.”

Now all of a sudden the American people are supposed to believe that Russian bot attacks were used to spread alternative news reports when we already know for a FACT that outlets such as Infowars have absolutely no connection to Russia?!

Make no mistake, this is about scaring and possibly censoring news outlets that do not spread the establishment narrative in yet another attack on the free press in the wake of Donald Trump’s stunning election victory. (News outlets such as McClatchy are openly doing the dirty work for the deep state.)

Another key element of this attack is the fact that we now know that FBI director James Comey is absolutely 100% a globalist operative who is not only working directly against the president but also using the power of his position to target news outlets that are not on board with the 24/7 anti-Trump attacks seen throughout the mainstream media.

Unfortunately, no one ever said the deep state operatives working against Trump were stupid and they have now put Comey in a position where he can basically do whatever he wants without being fired due to the fact that he is investigating the fake ties between Trump and Russia and his firing would be seen as an act to cover-up those allegations.

While Trump may not be able to fire him at this moment, the American people can surely make their voices heard and DEMAND that Comey stop using FBI resources for a political witch-hunt that targets the foes of the establishment. We truly CANNOT stay quiet as this attack could be the beginning of the end of the real free press in America.

It is also important to note that while Infowars and Breitbart were the outlets named, its highly likely that the FBI is targeting numerous other outlets including any number of websites that were originally listed as Russian agents in the failed ProporNot list published by the Washington Post. (Which includes Intellihub.)