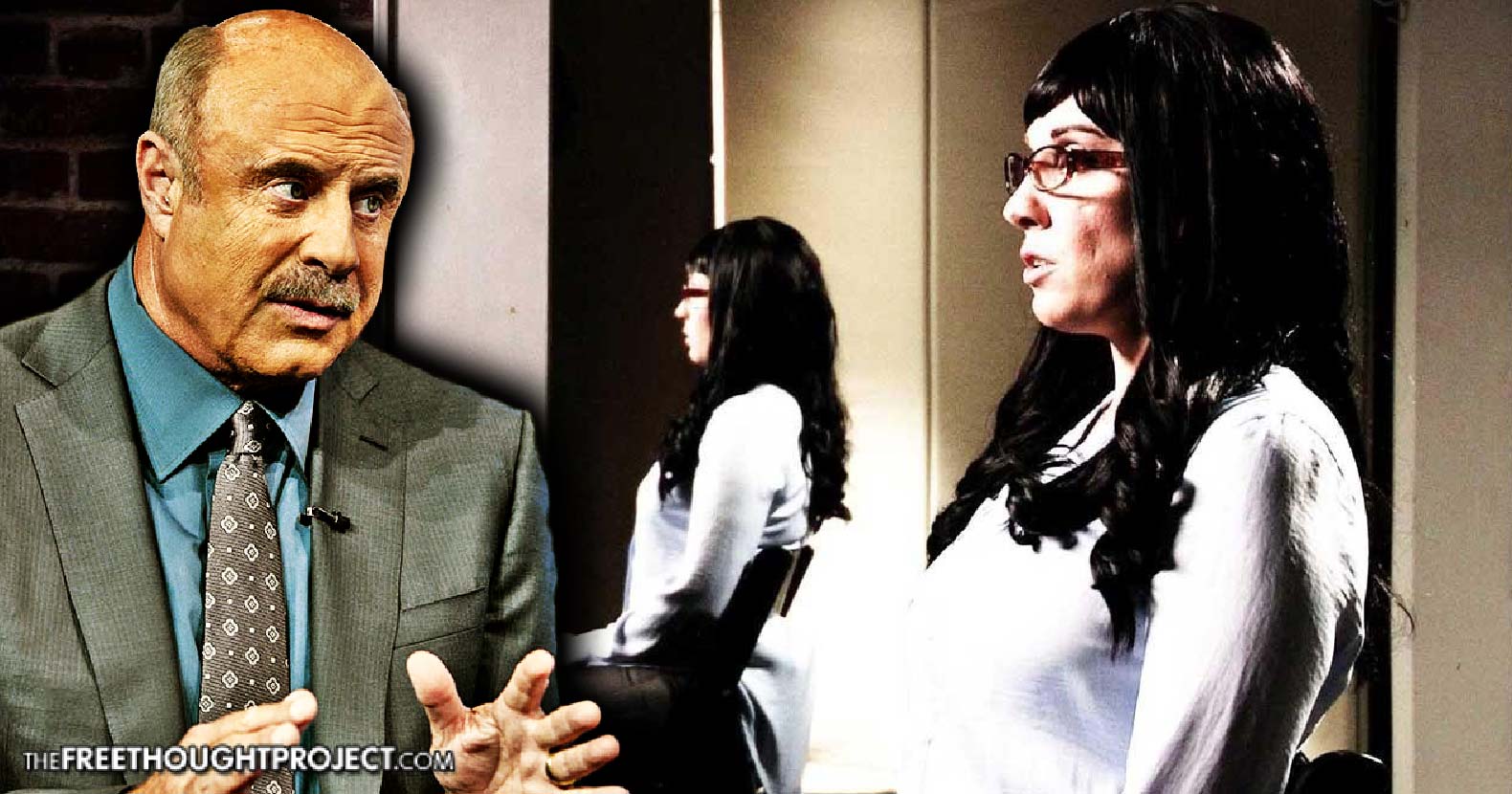 In an exclusive interview seen by millions across the United States, Dr. Phil exposed the deadly secretive, and the highly organized world of elite pedophilia — with a former child sex slave going by the name of “Kendall” describing being literally born into, and growing up in, the world of elite sexual slavery.

Kendall explains that she was born to be a sex slave, as her parents intentionally had her for the trafficker she calls her “owner.” Kendall says that her parents sold her at birth to an elite pedophile ring that serviced some of the world’s power elite, describing her first memories as being passed around groups of rich and prominent men and women for them to “take turns” with her for sadistic sexual pleasure.

Making her first public appearance after escaping from the man she calls her “owner,” Kendall describes being forced to participate in actions that shock the conscience. She explains that she was forced to rape children as young as 5- years-old, and even admits to having been forced to kill a baby by the human trafficker she describes as her “owner.”

Kendall says that she can tell the difference between kids born into sexual slavery and ones that have been kidnapped, as the ones born into it are more docile and less upset as it is the only reality they have ever known. When Dr. Phil asks how old she thinks she was when she was first raped, Kendall explains that it was “before I could talk – I was used to it by the time I was 2.”

She says she doesn’t even know her actual age, as she has been a sex slave her entire life, being trafficked around the globe to be molested and raped by the societal elites – including high ranking law enforcement official, major sports franchise owners and even high level U.S. politicians.

She describes having birthed 3 children while in captivity, all of which have been taken from her by her owner/trafficker, and are believed by Kendall to now be child sex slaves themselves.

“I was allowed to get pregnant, because men paid for that,” Kendall said.

Kendall notes that the pedophiles she came into contact with over the years were extremely wealthy – often “pillars of the community” – with some even owning private islands or large pieces of land.

“They would buy us just to hunt us,” she said.

She recalls one of her most fearful memories was that of the pedophiles hosting a “hunting party” on one of their large private plots of lands, making numerous children run and hide in fear, as they were the “prey” to be hunted. The pedophiles would then hunt the children as they ran and hid in fear – raping and torturing them when they were captured.

The activities described by this woman are so profoundly disturbing they can be almost hard to believe, but Dr. Phil confirms that his team not only investigated Kendall’s case for four months, but also consulted with law enforcement experts who confirmed her story. Dr. Phil said he “100% believes” that she is telling the truth.

In a damning indictment of the power-elite, Kendall described how the pedophile politicians would adorn her in designer clothes, well groomed hair and makeup to give the appearance of class and sophistication. She explains that she and other children were often hung from cages suspended from the ceiling, and that they were often drugged before being transported in the darkness of night.

She claims that she was trafficked to pedophile politicians, and taken to political parties attended by high-level politicians who used her for their personal pleasure. The politicians always took great care to hide what they were doing, according to Kendall, who confirmed that there are many elite U.S. politicians that have been engaged in raping children for many years — a reality that has consistently been covered up and completely hidden from voters.

Perhaps the reason these crimes have been so steadfastly hidden from public view, is that high-level law enforcement officials have also been implicated as being part of the elite pedophile network.

This is just the latest case to emerge in what is now being called #PedoGate. #PedoGate refers to an international pedophile ring composed of politicians and other high profile societal elites.

After President Trump held a press conference last month, in which he detailed his plans to go after the victims of the “human trafficking epidemic,” former U.S. Congresswoman Cynthia McKinney weighed in on the subject, noting that going after child predators will lead to the downfall of both Republicans and Democrats in the United States — as this problem goes all the way to the top.

As the Free Thought Project has consistently pointed out, pedophilia among the global elite is rampant.

In December, we reported on the massive child sex ring that was exposed in Norway. That investigation quickly led to arrests of “51 people, all men, (who) are so far involved in the case. 24 of them come from Hordaland and Sogn og Fjordane. Twenty-six come from other areas of Norway, from Southeast to Finnmark in the north. Among the accused offenders, there is also one Swedish national. Two politicians, one Labor politician from Oslo and a former national Progress Party (FrP) politician from Eastern Norway are involved in the case.” One is also a kindergarten teacher, and four of the 51 arrested were perpetrators in the video evidence collected.

We previously reported on the high-profile elite pedophilia scandal that gripped the U.K. – with its thousands of victims – being unceremoniously swept under the rug, which is indicative of the scope and breadth of the actual problem. In fact, the problem is so rampant in England that officials issued an order last month to stop naming streets and landmarks after local heroes and politicians because they could later be exposed as pedophiles.

In the case of the U.K. Inquiry, historical abuse by politically connected elites, celebrities, and politicians was brought to light — with an official inquiry being started — only to have the inquiry “crumble” after heavy pressure was exerted by highly placed power brokers within the U.K. establishment.

This was almost the exact same scenario as what took place in the United States in what became known as the Franklin child sex ring coverup — which involved high level Republicans during the George H.W. Bush administration. Once the FBI took over the investigation from state authorities, it turned into a witch hunt to persecute the child victims – going so far as to charge them with perjury in a successful attempt to scare the other 70+ victims to recant their testimony regarding the child sex ring.

While the story received a small measure of newspaper coverage, there was a complete blackout of the scandal by the mass media, thus most Americans have never heard about this scandal that reached all the way to the White House.

Domestically, there are relatively few high-level arrests, as anytime ‘the elite’ are mentioned alongside the term ‘pedophile,’ the Praetorian guard, aka the corporate media, shout down all those who dare pose any questions about those in power abusing the most vulnerable among us.

For example former U.S. Speaker of the House of Representatives, Dennis Hastert, a known serial child rapist, was never charged for his numerous crimes against children, which the FBI knew about, and had evidence of, for over a decade.

According to FBI whistleblower Sibel Edmonds:

Since 1996 the FBI has had tons of information on Hastert which was gathered in Chicago by the FBI’s Chicago Field Office. The incriminating criminal evidence in those files range from bribery, extortion, fraud, money laundering and embezzlement, to sexual crimes against minors and participation in foreign-operated drug operations.

Since 1997 the FBI has had much hard evidence on Hastert gathered by the FBI’s Washington Field Office. The documented deeds range from espionage to foreign bribery.

But that’s not all. The FBI also has had hard data on Hastert’s sexual violations outside the United States. The involved countries include Vietnam, Thailand, Turkey and Morocco, among others. This also included sexual favors as means of foreign bribery. Interestingly, the CIA had been documenting those sexual activities for many years, and not only on Hastert but on many others; elected and appointed.

So, when corporate media tells you #PizzaGate is fake news and that investigating whether Denny Hastert’s good friend, John Podesta, is involved in some way with pedophilia – given his close friendship with Hastert, proclivity for strange art featuring nude children and strange code words found in his leaked emails — it shouldn’t be shouted down as “fake news,” but investigated instead.

It seems that American politicians and their political cronies are virtually untouchable in the ivory towers of government. Since January of 2017 over 1,500 pedophiles and human traffickers have been arrested. However, the power-elite operating these child sexual slavery rings have not been among them… yet.