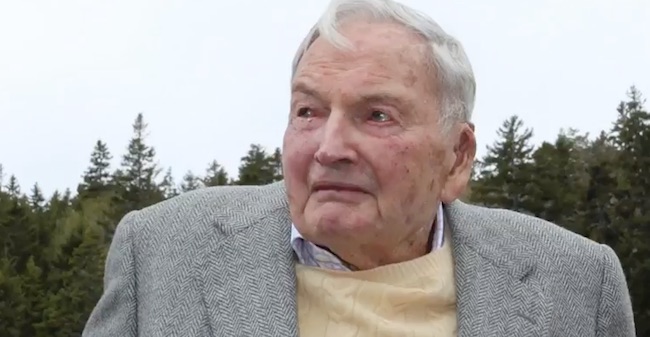 Globalist David Rockefeller died on Monday at the age of 101. However, while many of us know of his global agenda and his ties to such groups as the Bilderberg Group, the Trilateral Commission and the Council on Foreign Relations, some have never heard his own words which he spoke in 1991, where he outs the media for their complicity in advancing the globalists’ agenda.

Here’s the relevant section of the speech from 1991.

While Rockefeller praised the allies in the media for their discretion, it seems he was betrayed by this recording that demonstrates their own work to bring about a new world order.

“We are grateful to The Washington Post, The New York Times, Time magazine, and other publications, whose directors have attended our meetings and have respected their promises of discretion for almost forty years,” he said.

“It would have been impossible for us to develop our plan for the world if we had been subject to the bright lights of publicity.”

Then he went on to state that preparations had been made up to that point to push towards world government.

“But the world is now more sophisticated and prepared to march toward a world government,” he said.

You will not the narrator goes on to state that via that world government, men like Rockefeller would “create a world system of financial control in private hands, able to dominate the political system of each country, and the economy of the world as a whole.”

He ends by stating that the Council on Foreign Relations, of whom Rockefeller was an honorary chairman, is the “most visible conduit for carrying out the agenda” of controlling the entire world.

Rockefeller’s family was involved in eugenics and backed organizations like Planned Parenthood and deviants like Margaret Sanger.

One of Mr. Rockfeller’s most infamous quotes was:

“Some even believe we are part of a secret cabal working against the best interests of the United States, characterizing my family and me as ‘internationalists’ and of conspiring with others around the world to build a more integrated global political and economic structure—one world, if you will. If that’s the charge, I stand guilty, and I am proud of it.”

Additionally, the Rockefeller Brothers Fund Special Studies Project issued a report in 1959 that stated, “We cannot escape, and indeed should welcome, the task which history has imposed on us. This is the task of helping to shape a new world order in all its dimensions—spiritual, economic, political, social.”

Just three years after making the speech in 1991, Rockefeller told the United Nations Business Conference, “We are on the verge of a global transformation. All we need is the right major crisis and the nations will accept the New World Order.”

I assume that the globalists believe Islamic terrorism is that crisis, at least that is how it is being presented. While I agree it is a problem, the fact remains that countries should remain absolutely sovereign under God and that the United Nations, which is the fountainhead of all this type of thinking being externalized, should be abolished.

David Rockefeller is gone now. He has met his maker and realizes just how wrong he was. However, there are still those with his mindset in many of the organizations I mentioned, including the fake news media, who are still pursuing a new world order and a one world government. Those of us who love liberty must continue to fight the good fight of faith against this demonic ideology.