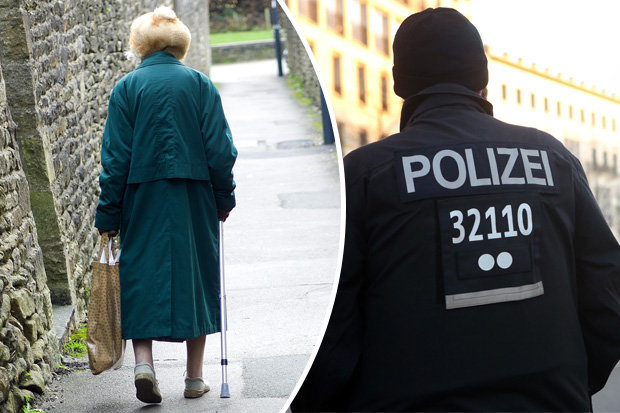 In Europe, no female of whatever age is safe from Muslim “migrants”:

Even really old women are not safe from being raped.

(1) On July 24, 2016, a 40-year-old “refugee from Eritrea” — code words for a North African Muslim “migrant” — raped a 79-year-old woman when she was visiting her sister’s grave in Ibbenbueren, North Rhine-Westphalia, Germany. A witness called the police after hearing the woman crying for help at around 6 a.m.

The victim was given medical treatment and released from hospital after two days.

The unnamed suspect, who has been in Germany since 2013 and was living in a hostel for asylum seekers, was charged with rape and put in police custody. If found guilty, he could face 15 years in prison. (Source: Daily Mail)

(2) On October 2, 2016 in Düsseldorf, a 19-year-0ld “Moroccan migrant” raped a 90-year-old woman in daylight. The woman had just left a church in the city center when her assailant pushed her into a narrow alley between two pubs, where he demanded money and then raped her.

The woman was treated for injuries in a hospital and released the next day.

The suspect was arrested a few weeks later, when DNA found at the crime scene matched the DNA taken from the “migrant” after he had been arrested for theft in May 2016. (Source: UK Express)

According to the prosecution, the 90-year-old victim had just lit a candle in the St. Lambertus Church when the young man confronted her and shouted “money, money!” But when the woman did not have any money with her, the 19-year-old dragged her into the courtyard where he pulled down her leggings and raped her, before strangling her and pulling at her hair. Then he went through her handbag, stealing her house key and writing down her address. Thankfully, there is no evidence that he later broke into her home.

The “Moroccan migrant” is facing up to 15 years in prison if found guilty of rape, bodily harm and theft. (Source: The Local)

A leaked internal “Casablanca Report” from Düsseldorf says there is a “child sex crisis in swimming pools”. Referring to the report, chief of the German police union Rainer Wendt said that Düsseldorf, like other German cities, has “around 2,244 North African migrant criminals”. Wendt said these migrant criminals are “laughing” at the German justice system as they are often allowed to go free after committing crimes: “They despise our country and laugh at our justice. If there is no pre-trial detention made, no imprisonment is imposed, and no deportations carried out. The police make multiple arrests and the perpetrators get away with it.” (Source: Breitbart)

The situation is so bad in Europe that 80% of Swedish police reportedly want to quit, while police have lost control of no-go zones in Germany and in the city of Marseilles, France, where “excessive violence, riots, and rapes has made it the most dangerous city in Europe.” Marseilles has a 30-40% Muslim population.

Boys are not safe either from being sexually assaulted by Muslim “migrants” (see “Iraqi migrant rapes a 10-year-old boy at a swimming pool in Vienna and tells police it was a ‘sexual emergency’“).

Nor are store mannequins and goats.