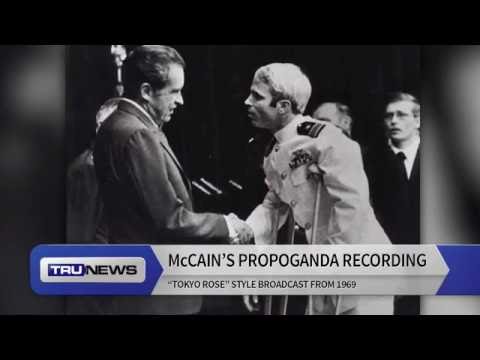 Son of a U.S. admiral, Senator John McCain (R-Arizona), 80, made his entire political career based on his reputation as a Vietnam war hero, incarcerated in a North Vietnamese prison camp for 5½ years until he was released on March 14, 1973. For that, McCain was awarded the Silver Star, Bronze Star, Purple Heart, Legion of Merit, Distinguished Flying Cross, and other commendations.

But there have been whispers and outright assertions by U.S. military veterans that McCain had sold out to the Viet Cong, ratted on his fellow inmates, and received preferential treatment.

Last August, TRUNews obtained a recording made by McCain in which he lauded his Viet Cong captors, well knowing his words would be used as propaganda. Indeed, McCain’s recording was broadcast on North Vietnamese radio in 1969.

The radio broadcast had never been heard in the United States. For that matter, no one even knew such a recording existed. But the broadcast was recorded by the Foreign Broadcast Information Service (FBIS), a branch of the CIA that monitored international shortwave and foreign radio broadcasts. Last year, the audio recording made by FBIS was found in a misplaced file in the National Archives in Washington, D.C.

Here’s the audio of John McCain’s “Tokyo Rose” propaganda message, followed by the transcript of what he said. (Note: Tokyo Rose was a fabricated name given by Allied troops in the South Pacific during World War II to all female English-speaking radio broadcasters of Japanese propaganda. The programs were broadcast in the South Pacific and North America to demoralize Allied troops abroad and their families at home by emphasizing troops’ wartime difficulties and military losses.)

To the Vietnamese people and the government of the DRVN (Democratic Republic of Vietnam):

I, as a U. S. airman, am guilty of crimes against the Vietnamese country and people. I bombed their cities, towns and villages, and caused many injuries, even deaths, for the people of Vietnam.

I was captured in the capital city of Hanoi, while attacking it. After I was captured, I was taken to the hospital in Hanoi, where I received very good medical treatment. I was given an operation on my leg, which allowed me to walk again, and a cast on my right arm, which was badly broken in three places. The doctors were very good and they knew a great deal about the practice of medicine. I remained in the hospital for some time and regained much of my health and strength.

Since I arrived in the camp of detention, I have received humane and lenient treatment. I received this kind of treatment and food even though I came here as an aggressor and the people who I injured have much difficulty in their living standards.

I wish to express my deep gratitude for my kind treatment and I will never forget this kindness extended to me.

In 2015, Donald Trump ignited a political firestorm when he said John McCain is not a war hero. It turns out that, once again, Trump is right!