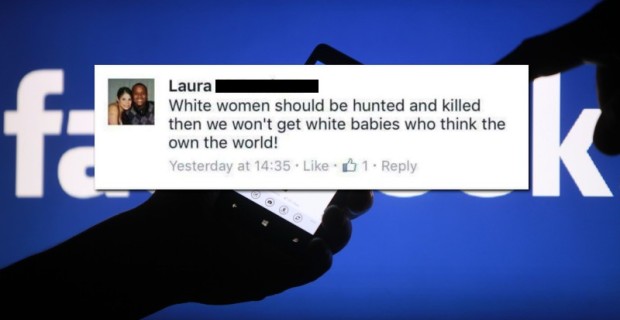 The way in which Facebook polices content on its network is under scrutiny again after it was revealed that a post in which a user called for white women to be “hunted and killed” was deemed to not be a violation of community standards.

“White women should be hunted and killed then we won’t get white babies who think the(y) own the world,” the user posted.

When the post was reported by another user for “hate speech,” Facebook responded with the message, “We reviewed the comment you reported for displaying hate speech and found it doesn’t violate our Community Standards.”

Meanwhile, posts by Christians that simply state bible passages in discussions about homosexuality are being removed, while pages devoted to showing grisly mock images of President Trump being assassinated are not taken down.

The social networking giant has also received criticism for several recent incidents during which rapes of women have been been live video streamed on the platform.

Facebook also refused to remove the infamous video where a mentally disabled man was tortured by a group of young black men when it was reported.

It seems that Facebook is too busy complying with threats to remove so-called “fake news” to deal with actual examples of hate speech and violence.

Flags for so-called fake news which cite Snopes – a far-left partisan outfit – as an independent fact checker, are already appearing when users attempt to post links to certain stories.

This is now appearing on Facebook posts. Snopes is a bias, far-left outfit. It is not a responsible "fact-checker". pic.twitter.com/IMB0RVJklz

Facebook also began recently declaring Infowars posts to be “spam” and deleting them from public view, although this appears to have been remedied for the time being.