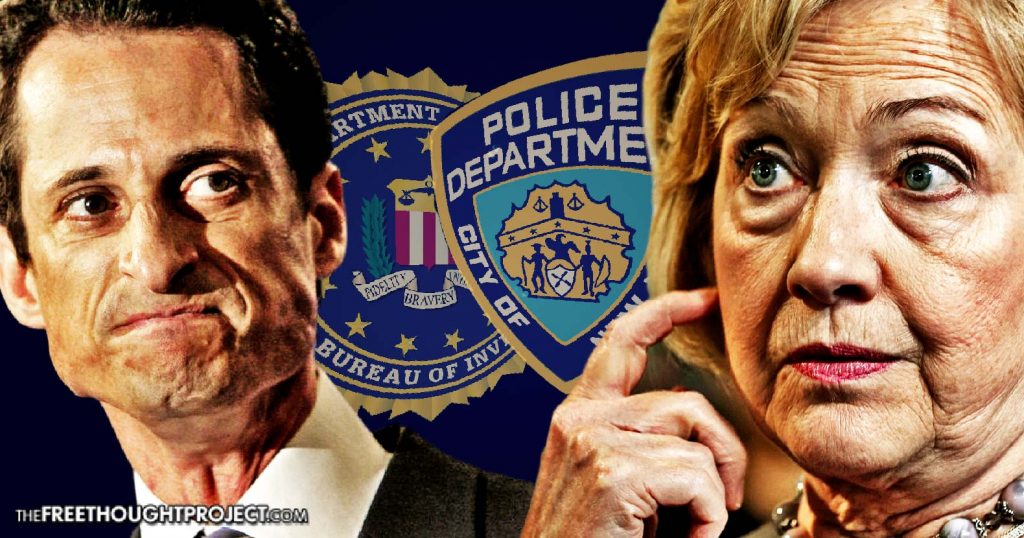 New York, NY – Damning revelations from within the New York Police Department have come to light, as detectives working an underage child pornography case against Anthony Weiner have confirmed to the media organization True Pundit that “the laptop seized from the former congressman contains proof that Hillary Clinton knew he was engaging in a long sexual relationship with a minor but did not intervene to alert any state or federal authorities to protect the 15-year-old.”

Instead of rescuing the minor from a sex-obsessed Weiner, Clinton who was the Democratic presidential candidate at the time and eventual front runner, counseled her long time aide Abedin, to end her relationship with him because bad publicity could harm the campaign.

NYPD officials said Clinton and Abedin discovered Weiner’s sexting with the minor in April 2016 and that he had already been corresponding with the youth for months. Neither Clinton nor Abedin apparently did anything to stop the abuse of the minor. Instead, the repeated incidents — which breach a host of state and federal laws — were kept quiet.

The NYPD source made clear that “the FBI knew Clinton did nothing to try and stop Weiner from repeatedly sexting a minor during the election. And the FBI likewise has apparently done nothing since the election to charge — or even question — Clinton for what appears to be intentionally endangering a minor entangled in a child pornography case,” according to True Pundit.

The source went on to explain that although FBI Director Comey said his agents found no evidence that Hillary Clinton had engaged in criminal conduct, this information directly contradicts the reality of the situation — which involved high-level discussions regarding charging Clinton under New York statutes for failing to notify law enforcement of a minor being exploited. Eventually, federal prosecutors asserted dominance, making clear that the case was now an FBI case to be handled by the U.S. Justice Department – and that no charges like the ones contemplated were to be originated from New York state or the local jurisdiction where the girl lived.

“One bullshit road block after another,” a NYPD source told True Pundit.

Although NYPD investigators initially held out a glimmer of hope that Clinton would be charged after she lost the election, it became clear that Clinton got a free pass from the feds – and now only five months later, Clinton is talking about running for New York City mayor instead.

“They (feds) sat on it,” The NYPD source said. “Fucking disgraceful.”

According to True Pundit:

Some of the facts that Abedin, Clinton and the FBI apparently intentionally squelched include:

In their initial exclusive report, on Nov. 2, 2016, which appears below, True Pundit reported that Anthony Weiner and other Hillary Clinton associates could potentially face federal charges of child exploitation, sex crimes with minors and possible other felony charges including child pornography.

The NYPD seized the computer from Weiner during a search warrant and detectives discovered a trove of over 500,000 emails to and from Hillary Clinton, (Huma) Abedin and other insiders during her tenure as secretary of state. The content of those emails sparked the FBI to reopen its defunct email investigation into Clinton on Friday.

But new revelations on the contents of that laptop, according to law enforcement sources, implicate the Democratic presidential candidate, her subordinates, and even select elected officials in far more alleged serious crimes than mishandling classified and top secret emails, sources said. NYPD sources said these new emails include evidence linking Clinton herself and associates to:

NYPD detectives and a NYPD Chief, the department’s highest rank under Commissioner, said openly that if the FBI and Justice Department fail to garner timely indictments against Clinton and co- conspirators, NYPD will go public with the damaging emails now in the hands of FBI Director James Comey and many FBI field offices.

“What’s in the emails is staggering and as a father, it turned my stomach,” the NYPD Chief said. “There is not going to be any Houdini-like escape from what we found. We have copies of everything. We will ship them to Wikileaks or I will personally hold my own press conference if it comes to that.”

The NYPD Chief said once Comey saw the alarming contents of the emails he was forced to reopen a criminal probe against Clinton.

“People are going to prison,” he said.

Meanwhile, FBI sources said Abedin and Weiner were cooperating with federal agents, who have taken over the non-sexting portions the case from NYPD. The husband-and-wife Clinton insiders are both shopping for separate immunity deals, sources said.

“If they don’t cooperate they are going to see long sentences,” a federal law enforcement source said.

NYPD sources said Weiner or Abedin stored all the emails in a massive Microsoft Outlook program on the laptop. The emails implicate other current and former members of Congress and one high-ranking Democratic Senator as having possibly engaged in criminal activity too, sources said.

Prosecutors in the office of US Attorney Preet Bharara have issued a subpoena for Weiner’s cell phones and travel records, law enforcement sources confirmed. NYPD said it planned to order the same phone and travel records on Clinton and Abedin, however, the FBI said it was in the process of requesting the identical records.