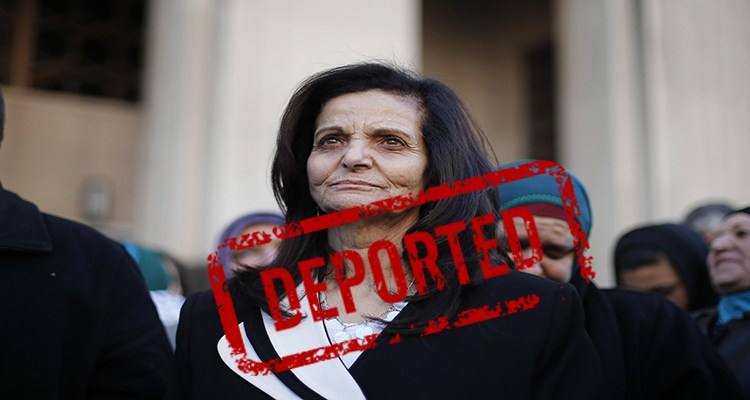 Rasmea Odeh, 69, is a member of a designated Palestinian terror group and leader of “A Day Without a Woman” march has pleaded guilty to a crime and will cause her to lose her US citizenship and be deported from the united States.

Odeh entered a guilty plea because she lied on her visa and citizenship form about her ties to a designated terror group and previous terrorist convictions. Though born in Palestine, Odeh will be deported to Jordan and be stripped of US citizenship.

“She will plead guilty to Unlawful Procurement of Naturalization, lose her U.S. citizenship, and be forced to leave the country, but will exit the U.S. without having to serve any more time in prison or ICE detention, a victory, considering that the government had earlier fought for a sentence of 5-7 years.”

An activist with the Arab American Action Network, Odeh was alleged to be a member of the Popular Front for the Liberation of Palestine (PFLP), a designated terror group. She was convicted in Israel in 1970 of taking part in two bombings the year before, one at a supermarket in Jerusalem and another at the British consulate. Two Israeli students were killed in the supermarket bombing. Nine were injured in the two blasts.

Odeh was freed from prison in 1980 as part of a prisoner exchange. She emigrated to the U.S. in the 1990s and gained citizenship in 2004. She has denied taking part in the terrorist acts and has claimed that she was tortured and sexually assaulted by Israeli police to elicit her confession.

Her defense issued a statement in which they claim that “under this current, racist political climate, and facing 18 months or more of imprisonment, as well as the possibility of indefinite detention by Immigration and Customs Enforcement (ICE), Rasmea has made the difficult decision to accept a plea agreement.”

The problem with that statement is that this has absolutely nothing to do with racism. The issue has to do with her lying on her immigration forms. Those lies were to cover up why she was arrested and imprisoned in the first place.

Now, if her claims are genuine regarding being tortured and sexually abused by Israeli police, then let’s see the evidence for that.

Her defense claims she was not allowed to present that evidence.

In her 2014 trial in U.S. federal court, where she was convicted and sentenced to 18 months in prison for allegedly giving false answers to questions on her applications for permanent residency and citizenship, Judge Gershwin Drain prohibited the defense from challenging the legality of the military tribunal or offering proof of her innocence of the bombings. She was also not allowed to put forward that she suffered from Post-Traumatic Stress Disorder as a result of the torture, but she won an appeal and a new trial expressly based on the excluded torture evidence. Its back against the wall, the government then filed a vindictive new superseding indictment that falsely accused Rasmea of being a “terrorist” and a member of a “designated terrorist organization.”

The circles that she runs in for “social justice” does make this author at least question exactly what was she party to that she got caught up with 500 others in a terror raid due to a bombing?

From the defense statement:

Rasmea Odeh—a long-time icon of the Palestine liberation movement—is now a name known in every corner of the movement for social justice in the U.S. From the Movement for Black Lives in Ferguson, Chicago, and beyond, to the call for a global #WomenStrike on International Women’s Day, Rasmea has become synonymous with resilience and resistance. This fight not only brought her story to the U.S. and the world, but also pushed forward the cause of the liberation of Palestine. She exposed Israel for what it is – a racist occupier and colonizer – and put its policy of torture and sexual assault on the permanent record in a U.S. court of law.

I am not a Zionist, but a “racist occupier”? Israel houses Jews, Europeans, Arabs and Palestinians in its borders. How is that racist?

Still, the defense seeks to control the narrative by claiming her plea is a “win.”

After the initial verdict was read, Odeh said, “There is justice in this world, we will find it. We will face injustice and we have to change this world, not just in this country, in all the world in all the places there is no justice, we have to bring the justice together. In spite of everything, we are the stronger people, not the government who is unjust.”