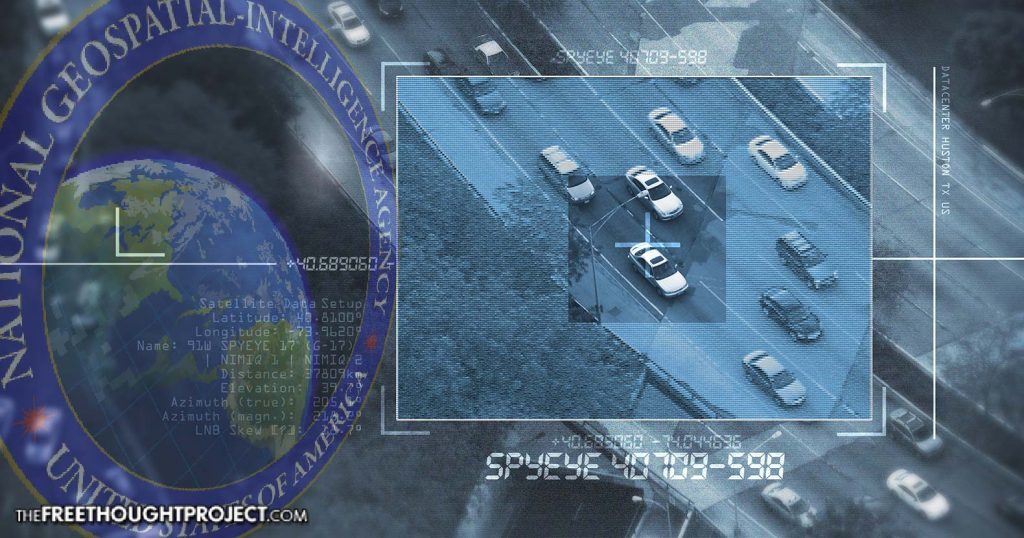 While most Americans would consider the CIA, and perhaps the NSA, household names, one U.S. spy agency — whose headquarters surpasses the U.S. Capitol in size — has managed to keep to the shadows while possessing cutting edge tools of the surveillance trade.

Called the National Geospatial-Intelligence Agency (NGA), even former President Barack Obama didn’t know of its existence when he first took office — despite that the agency employs some 15,400 people.

“I work at NGA, National Geospatial-Intelligence Agency,” he answered.

“Outstanding,” then-president Obama asserted. “How long have you been doing that?”

“So, explain to me exactly what this National Geospatial …” Obama asked, unable to recall the agency’s full name.

“Obama appeared dumbfounded,” Foreign Policy’s James Bamford reports. “Eight years after that videotape aired, the NGA remains by far the most shadowy member of the Big Five spy agencies, which include the CIA and the National Security Agency.”

The NGA’s secretive identity belies the agency’s massive physical size and the scope of its surveillance activities, as Bamford continues,

“Completed in 2011 at a cost of $1.4 billion, the main building measures four football fields long and covers as much ground as two aircraft carriers. In 2016, the agency purchased 99 acres in St. Louis to construct additional buildings at a cost of $1.75 billion to accommodate the growing workforce, with 3,000 employees already in the city.

“The NGA is to pictures what the NSA is to voices. Its principal function is to analyze the billions of images and miles of video captured by drones in the Middle East and spy satellites circling the globe. But because it has largely kept its ultra-high-resolution cameras pointed away from the United States, according to a variety of studies, the agency has never been involved in domestic spy scandals like its two far more famous siblings, the CIA and the NSA. However, there’s reason to believe that this will change under President Donald Trump.”

Originally tasked primarily with cartography — before a mammoth expansion, the spy arm had been called the National Imagery and Mapping Agency — until a name and mission switch in 2003 gave the National Geospatial-Intelligence Agency its name, with the hyphen allowing a three-letter acronym so enamored by the government.

President Dwight D. Eisenhower, whose fondness for imagery intelligence became known when he served as a general during World War II, created the National Photographic Interpretation Center shortly before leaving office — an agency also later absorbed by the NGA.

Now, the NGA works in conjunction with the U.S. Air Force to analyze the staggering amount of data collected through aerial surveillance abroad — mostly by unmanned aerial systems, such as drones with high-powered cameras.

According to at least one source, as of 2013, the NGA was integral in the analysis of surveillance data pertaining to Iran’s nuclear capabilities.

Revelations on the depth and breadth of the Central Intelligence Agency’s domestic capabilities, long believed out of its territory, was exposed by Wikileaks Vault 7 recently to be on par with National Security Agency programs — so much so, analysts say it constitutes a duplicate Big Brother.

Data provided to the NGA by military officials has assisted in various U.S. operations in the Middle East by tracking vehicles believed responsible for planting improvised explosive devices, or IEDs, and for monitoring hot spots for insurgent breakouts.

But the NGA hardly only keeps to support operations, as David Brown — author of the book, “Deep State: Inside the Government Secrecy Industry” — explained,

“Before the trigger was pulled on NEPTUNE’S SPEAR, the mission to kill Osama Bin Laden, SEAL Team Six had access to a perfect replica of the Abbottabad compound where the terrorist mastermind was hiding. The details for the replica were gathered by the NGA, which used laser radar and imagery to construct a 3D rendering of the compound. How precise were its measurements and analysis? The NGA figured out how many people lived at the compound, their gender, and even their heights. But the NGA didn’t stop there: Its calculations also helped the pilots of the stealth Black Hawks know precisely where to land.”

With a combined budget request for 2017 of $70.3 billion, the National and Military Intelligence Programs — NGA falls under the latter — have seen a quickening of support from the authoritarian-leaning, pro-military Trump administration. This and additional factors — such as the astonishingly sophisticated equipment at the agency’s disposal — have ignited fears the NGA could be granted authority to bring its expert microscope into focus against the American people.

“While most of the technological capacities are classified, an anonymous NGA analyst told media the agency can determine the structure of buildings and objects from a distance, has some of the most sophisticated facial recognition software on the planet and uses sensors on satellites and drones that can see through thick clouds for ‘all-weather’ imagery analysis,” reports news.com.au.

“From navigating a U.S. aircraft to making national policy decisions, to responding to natural disasters: today’s U.S. armed forces rely on Geospatial Intelligence (GEOINT) to meet mission requirements. As the nation’s primary source of GEOINT for the Department of Defense and the U.S. Intelligence Community, the National Geospatial-Intelligence Agency (NGA) depends on the National Geospatial-Intelligence College (NGC) to produce top-tier talent to deliver intelligence with a decisive advantage. Today, Booz Allen Hamilton (BAH) announced that it has been awarded a five-year, $86 million contract by NGA-NGC to lead the Learning Management and Advancement Program (LMAP) that will provide high-quality learning solutions to equip a diverse workforce with the knowledge and skills necessary to meet current and future GEOINT mission requirements.”

Bamford points out for Foreign Policy the Trump administration intimated a significant expansion of spying on mosques and Islamic centers, while others admonish said surveillance could put Black Lives Matter and other protest groups in the NGA’s silent crosshairs.

Of distinct concern for privacy advocates are drones with uncanny zooming capabilities — features used against U.S. citizens before. Bamford continues,

“In 2016, unbeknownst to many city officials, police in Baltimore began conducting persistent aerial surveillance using a system developed for military use in Iraq. Few civilians have any idea how advanced these military eye-in-the-sky drones have become. Among them is ARGUS-IS, the world’s highest-resolution camera with 1.8 billion pixels. Invisible from the ground at nearly four miles in the air, it uses a technology known as ‘persistent stare’ — the equivalent of 100 Predator drones peering down at a medium-size city at once — to track everything that moves.

“With the capability to watch an area of 10 or even 15 square miles at a time, it would take just two drones hovering over Manhattan to continuously observe and follow all outdoor human activity, night and day. It can zoom in on an object as small as a stick of butter on a plate and store up to 1 million terabytes of data a day. That capacity would allow analysts to look back in time over days, weeks, or months. Technology is in the works to enable drones to remain aloft for years at a time.”

With cutting edge technology, a rapid enlargement underway, and billions in budgetary funds at the ready, the National Geospatial-Intelligence Agency is the cloaked, mute sibling of the nefarious Intelligence Community — but it’s time to pull the protective shell off this potential ticking time bomb before reining it in becomes an impossibility.