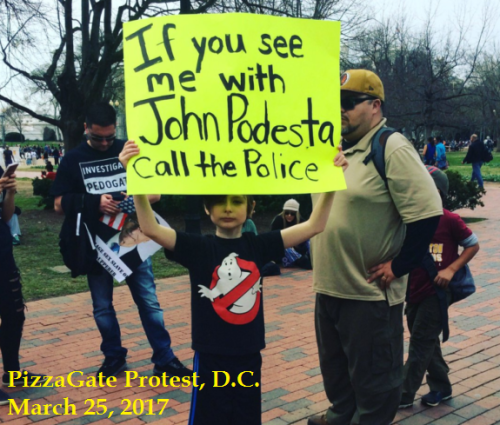 A mechanism for the alteration or disappearance of inconvenient or embarrassing documents, photographs, transcripts, or other records, such as from a website or other archive, particularly as part of an attempt to give the impression that something never happened. The concept was first popularized by George Orwell’s dystopian novel Nineteen Eighty-Four, where the Party’s Ministry of Truth systematically re-created all potential historical documents, in effect, re-writing all of history to match the often-changing state propaganda.

Saturday, March 25, 2017, as planned, there was a protest in front of the White House to raise awareness about Pizzagate.

The protest was planned to begin at 11 a.m.

At 12:09 p.m., AltMedia powerhouse Gateway Pundit published a report by its correspondent Lucian Wintrich on the protest, “#Make America Great Again Vets Rally Alongside #PizzaGate Protesters in Washington, D.C.“. That evening, FOTM received Wintrich’s article in an email from reader “GiGi”. By that time, the article had garnered 65 comments from Gateway Pundit‘s readers.

Wintrich’s article consisted of 4 photos of the protest, some pics taken at an earlier date of the interior of Comet Ping Pong, and two paragraphs of text written by Wintrich. Below are 2 pics from the protest.

This is what Lucian Wintrich wrote:

Outside the White House, hundreds have gathered to both show support for President Donald J. Trump while others gathered to raise awareness over the controversial #PizzaGate conspiracy. For those of you who might not know, #PizzaGate believers allege that a Washington pizzeria, named Comet Ping-Pong, is the home of a global pedophilia and child sex abuse ring organized by people including Hillary Clinton, Jon Podesta, among and other leading Democrats and members of the DNC.

While a member of The Gateway Pundit reporting staff did venture down to Comet Ping-Pong to investigate, the only thing we came away with is the fact the pizzeria is very creepy and does not seem child-friendly at all. We were not able to prove or confirm allegations of child trafficking, just creepiness (see pictures below, taken by a Gateway Pundit reporter inside Comet Ping-Pong).

Early Sunday morning, when I clicked on the embedded link to Wintrich’s article (http://www.thegatewaypundit.com/2017/03/maga-vets-rally-alongside-pizzagate-protesters-washington-d-c/), I got this message:

I did just that:

In other words, Wintrich’s Pizzagate protest article had been disappeared into the memory hole, with no explanation from Gateway Pundit.

A day before the Pizzagate protest, Alex Jones of InfoWars, another AltMedia powerhouse, publicly apologized to James Alefantis — the owner of Comet Ping Pong whom GQ magazine named the 49th most powerful person in Washington, D.C. — for having broadcast videos and published articles on Pizzagate, which Jones now calls “an incorrect narrative”. See “Alex Jones apologizes for Pizzagate ‘fake news’ on eve of March on D.C.“.

Sure looks like the Alex Jones virus has infected Gateway Pundit as well.