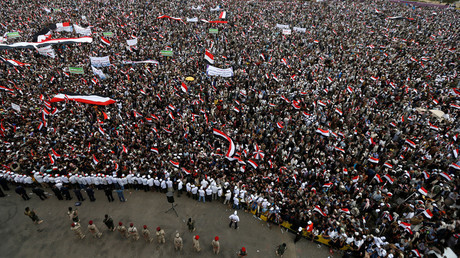 Sana’a, Yemen — Hundreds of thousands took to the streets in the Yemeni capital of Sana’a to protest the second anniversary of the invasion by Saudi Arabia, as well as the ongoing military offensive by the loosely U.S.-backed, Saudi-led coalition of nine nations attempting to crush the Shia Houthi rebellion.

“I participated in the protests against the aggression (by the Saudi-led coalition), maybe our voice will be heard by the world over to stop the war,” the Associated Press quoted protester, Ahmed Mohsen, who, along with war-weary throngs of others — participated to try to call attention to the U.S.’ other major conflict.

Although official crowd totals have not been confirmed, immense crowds clogged the capital city’s streets as supportive and direct actions by the United States military ratcheted up significantly in recent weeks under the nascent Trump administration.

“Casualty figures have exceeded 10,200 since the beginning of the conflict, with a reported 40,000 injured and more than three million displaced,” admittedly state-run RT reports. “Over the past month alone, 106 civilians have been killed in Saudi-led airstrikes, the UN said in a press release.”

According to the Associated Press, the protests, “organized by Shiite Houthi rebels supporting former president Ali Abdullah Saleh and Houthi leader Abdul-Malek al-Houthi, called for an end to the conflict which has killed more than 10,000 civilians, displaced over three million people and pushed the impoverished country to the brink of famine.”

A mosaic of extenuating circumstances and delicate political dealings came as baggage with the Saudi invasion of the geostrategically-invaluable nation, located at one mouth of the world’s most heavily traveled maritime commerce route.

In fact, to choke remaining resistance to the internationally-recognized government of Abed Rabbo Mansour Hadi, the U.S.-supported coalition has imposed a supply blockade — to insufferable consequences the likes of which should constitute a war crime.

Despite no official declaration of war, and continuous headlines from the simultaneous Syrian conflict, the situation in Yemen has mushroomed into an horrific humanitarian crisis.

“Everywhere you go, you see people begging in the streets in bigger numbers, you see people rummaging through rubbish to survive,” admonished Jamie McGoldrick, U.N. humanitarian coordinator for Yemen, cited by the BBC.

“You hear catastrophic stories of children dying because they can’t get to health centres. People dying of malnutrition, people dying of preventable diseases. It will get worse because the problem is that the economy is in really bad shape and banking sector doesn’t function.”

Just last month, the United Nations World Food Programme reported on the scope of an issue for which the U.S. is inexcusably complicit, as abc.net.au reports,

“Yemen is the worst affected country with the UN describing it as being ‘on the brink of famine’. More than 7.3 million people urgently need food assistance and more than 460,000 children are suffering from severe acute malnutrition.”

As The Intercept’s Alex Emmons explains, “Last week the UN warned that the majority of Yemen’s population is suffering and on the brink of famine. Stephen O’Brien, the UN’s undersecretary-general for humanitarian affairs, criticized both sides of the conflict for restricting the flow of aid, but said that the Saudi-imposed naval blockade was particularly devastating for the desert country, which imports most of its food.

“The Saudi-led coalition has persistently attacked fisherman, who account for another major food source in Yemen.

“The situation has worsened as the Saudi-backed forces prepare to retake the Western port city of Hodeida, once the waypoint of 70 percent of Yemen’s food and aid imports. Near the beginning of the war, Saudi Arabia bombed the cranes that port workers use to unload ships — slowing the pace of work to a crawl. Since then, airstrikes by the coalition have made it virtually impossible for aid to reach the port.”

For the U.S., Yemen serves as the driver of an escalating proxy war with Iran, as Houthi rebels — long rumored to be receiving clandestine but expansive assistance from Tehran — received official support in the form of weapons, arms, finance, and logistics from the Iranians to stave off the Saudi coalition.

“At this meeting, they agreed to increase the amount of help, through training, arms and financial support,” the anonymous official said.

“Yemen is where the real proxy war is going on and winning the battle in Yemen will help define the balance of power in the Middle East.”

With stakes that critical to multiple parties in the conflict, it seems Yemen could become the U.S. next nightmarish morass, on par with Afghanistan and Iraq — no matter how many hundreds of thousands, if not millions, express consternation to war as they gather in the streets of their homeland.