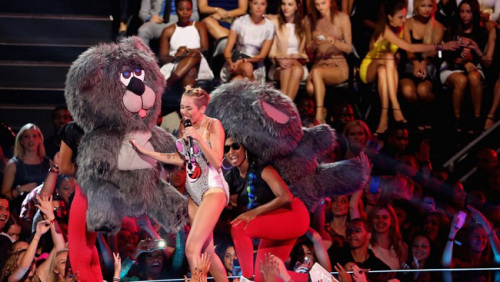 And then, of course, there’s this Vanity Fair picture of Billy Ray Cyrus with his then-teenage daughter Miley, looking more like lovers than father-and-daughter:

Some FOTM readers have suggested that Miley displays all the signs of having been sexually abused.

On December 29, 2014, Miley posted on Instagram a picture of herself in a pizza hat and onesie:

Miley likes pizza so much she covered her bed with a sickening-looking pepperoni pizza bedspread (source):

Here’s Miley posing on the pizza bedspread, once again with her tongue sticking out:

Here she is making an obscene gesture with her tongue at her birthday cake shaped like a giant pizza:

Do you remember Miley posing with giant teddy bears? Here’s an account of Miley at the 2013 MTV Music Awards (Hollywood Reporter):

Miley Cyrus climbed out of a giant teddy bear, sticking her tongue out of the side of her mouth.

She then strutted around the stage, accompanied by dancers wearing giant teddy bears, performing her controversial single “We Can’t Stop.”

Sporting a furry bustier designed to match the teddy bear motif, the 20-year-old singer at one point grabbed the rear end of one of her dancers before bending over to shake her own behind at the audience.

I had found the teddy bear to be disquieting, although I did not know why.

Beginning in the early 1950s, the CIA conducted mind control experiments on human subjects in a program called Project MKUltra. The experiments were intended to identify and develop drugs and procedures to be used in interrogations and torture, in order to weaken the individual to force confessions through mind control. The program engaged in many illegal activities, including the use of unwitting U.S. and Canadian citizens as its test subjects, the manipulation of people’s mental states and brain functions via the surreptitious administration of drugs (especially LSD) and other chemicals, hypnosis, sensory deprivation, isolation, verbal and sexual abuse, as well as other forms of psychological torture.

Project MKUltra was officially halted in 1973 — or so they say.

According to Vigilant Citizen, “Young mind control victims are often given Teddy Bears by their handlers to make them develop an emotional attachment to them. This attachment is then exploited by the handlers to create emotional trauma.”

Now we know the significance of Miley Cyrus and those giant teddy bears.

While searching on the net for “pedo-bear,” I found that Cafe Press actually sells “Mk Ultra Teddy Bears”.