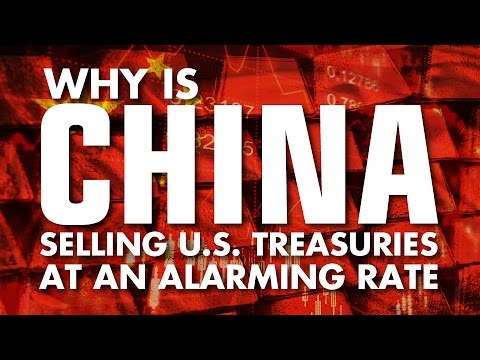 As global financial markets teeter on the edge of collapse, a report  published this morning suggests that the run up in the U.S. dollar may be over. As of today, some 80% of post-Trump election gains have been wiped out and as noted in the special video report from Future Money Trends below, it appears that things are only going to get worse:

China sold more U.S. Treasuries last year than any country has ever sold in a single year… $188 billion worth… Japan is also making an exit, selling nearly $30 billion since election day… Belgium, Switzerland and Saudi Arabia have all become big sellers too…

Official national debt is $20 Trillion… the real debt has been calculated to be $200 Trillion… what’s not included in the official numbers is social security, Medicaid and Medicare obligations… Think about it… every penny spent on the military, welfare programs, foreign aid and even your Congressman’s paycheck… it’s all borrowed money…

As explained in the video report, our creditors know this and they are in the process of dumping their holdings before the whole system collapses in on itself.

While President Trump may have the best intentions, Future Money Trends warns that the debt ceiling debate is just getting started, and chances are that neither Republicans or Democrats will make it easy on the new administration. In fact, it’s quite possible that, as we highlighted previously, the Deep State will make their move to overthrow Trump in June, because on June 1st the United States will literally run out of money unless the debt ceiling is raised.

While Congress would normally just take a vote and push the limit higher, the current political environment is such that the debt ceiling itself could be used to attack the Trump administration and potentially even crash the U.S. economy.

The U.S. is borrowing money to pay for it all… the largest debtor in history is flat broke…

Without borrowing it won’t even be able to pay for social security recipients or the interest on our debt… the same debt and creditors who have been selling Treasuries… Democrats will see this as the perfect political opportunity to do permanent damage to the Trump Presidency… and frankly, so will establishment Republicans who hate him, along with many of the Tea Party representatives who were elected to stop the reckless spending in D.C.

The debt ceiling will be a vote that no one wants to give, but has to happen…. otherwise the United States… the holder of the world’s reserve currency… will experience a real national default.

This year is anything but normal with President Trump at the helm, so the debt ceiling may well be used to crush his administration.

With our creditors dumping dollars at an unprecedented rate, coupled with the possibility of Deep State operatives and politicians using the debt ceiling as a financial weapon of mass destruction, one could certainly see the potential for serious problems going forward.

Moreover, and perhaps the most important takeaway from the video above, even if a debt ceiling vote does take place, it is clear to our creditors that there is no paying back any of the money we’ve borrowed, which may explain the mass exodus out of U.S. Treasuries over the last several months.