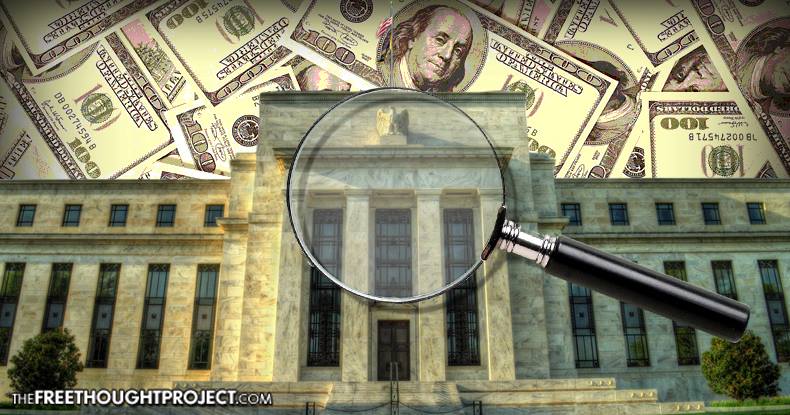 Washington, D.C. — For decades, the Federal Reserve of the United States Government has been ignoring Freedom of Information requests (FOIA), even finding and using loopholes to get around such requests from citizens, in regards as to how the world’s most powerful financial institution conducts its business. Nearly everything about the Federal Reserve remains a carefully and closely guarded secret. Yet, despite repeated requests from officials aware of its unscrupulous nature, the FED refuses to open its doors, let alone its financial books, to those stakeholders who dutifully claim the rights to know more: the U.S. citizenry.

For years, proponents of transparency have made repeated attempts to force the FED to operate with at least the same level of transparency with which the Congress operates to no avail. However, that could soon change.

The latest bill to hold the FED accountable was approved by the Republican-controlled Committee on Oversight and Government Reform on Tuesday. This bill began under former Congressman Ron Paul’s term and is being pushed through by his son.

As Market Watch reports, analysts said the measure has a better chance to become law now that Republicans control both houses of Congress and the White House. Paul’s son, Rand, the Republican senator from Kentucky, has introduced a similar measure in the Senate.

Proponents of auditing the FED say the central bank wields too much power, operates in near total secrecy, and is accountable to no one. Only an “outside auditor” employed by the FED is allowed to audit the FED’s books, not the government itself.

Supporters of the FED’s practice of keeping its business dealings secret say they believe the FED’s activity should not be politicized and forcing the FED to be audited, in much the same way an average citizen is audited by the Internal Revenue Service (IRS), the financial institution’s autonomy would be in jeopardy.

“This bill would open the floodgates to political interference in monetary-policy making,” said Del. Eleanor Holmes Norton, a Democrat from the District of Columbia.

Reuters writes, “Currently, the Fed publishes detailed audits of its finances but it keeps the inner workings of its monetary policy deliberations secret, publishing transcripts of policy meetings only with a five-year lag.”

Criticisms of such blind support for the FED are numerous. Ron Paul calls the Fed “the chief culprit” in the financial crisis of 2008. He says the FED’s willful printing of more currency creates a “boom” and “bust” scenario which has eroded the value of the U.S. dollar to record lows amounting to a loss of 96 percent of its value. Paul is not alone. Others who’ve tried to get any information from the FED have been frustrated by the lack of transparency the new bill seeks to enforce.

Getting around FOIA requests is easy for the FED. It denies such requests by stating it’s either not privy to the information or that a private entity has the information and therefore, FOIA does not apply. Here’s an example. While attempting to answer the question as to what extent minorities were responsible for defaulting on federally insured mortgages (during the latest recession) journalist Steve Sailer issued a FOIA request to the FED for the data. Here’s the response he said he received, which may also serve as rationale for the need to audit the FED. “The information you seek does not currently exist in the form you request,” wrote the FED’s Board of Governors in response to his FOIA request.

Going further, the explanation continued, “Even assuming the information could be derived and produced in the format you seek, the resulting table, like the underlying data set would be a record of the Federal Reserve Bank of San Francisco, not the Board. Accordingly, we cannot provide you with any such information.”

In other words, the FED acknowledged its data is housed under the Federal Reserve Bank of San Francisco (Private Bank) and is therefore not subjected to FOIA requests. Sailer’s discovery brings up one of the most contentious criticisms the FED faces by those who seek to force the central bank out of the shadows of privacy and into the light of transparency. All of the FED’s branches are privately owned. “The 12 regional Reserve Banks—Located around the country, the 12 Federal Reserve Banks are chartered as private corporations. Employees are not civil service,” writes the Federal Reserve Bank of San Francisco. So all the FED has to do to keep its activities secret is to transfer its data to one of its branches and FOIA no longer applies, as Sailer discovered.

The need to audit the FED is agreed to in somewhat of a bipartisan fashion, yet some Democrats and Republicans largely resist any calls for the audit. As a result, getting Congress to pass a bill requiring the FED to be audited by its own government has been no easy task. Similar bills calling for the FED to be audited were introduced in 2009 and in 2015. In both cases the bills passed in the House and failed in the Senate, and would likely have been vetoed by then president Barack H. Obama. President Donald Trump has voiced support for auditing the FED, however, that was prior to being elected. Whether or not he intends to keep that promise remains a mystery.